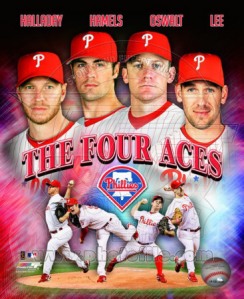 Photo courtesy of readingeagle.com. The Philadelphia Phillies are a prime example of how pitching is back in control of the MLB.

It is safe to say that this was not the most memorable All Star break by any means.  The home run derby seemed to drag on an hour longer than it should have, while the actual game not only was missing a plethora of star power, but it just lacked excitement in general.  Outside of Heath Bell’s sprint and slide entrance, did anything wow you?

Sure there was some very solid plays.  Hunter Pence showed off his cannon.  Jordan Walden showed that not only can he pitch, but he also can throw some leather via his nifty bare-handed play to punch out Cubs phenom, Starlin Castro at the plate.  But this game also demonstrated one unfortunate truth (at least from a fan’s perspective).

Sure when you grow up, coaches always tell you that pitching and defense wins.  And this is definitely true at all levels.  It is one of the fundamental truths of baseball.  But in the Major League All Star game, at least in the past, normally the League with the more lethal lineup came out victorious (at least in recent history).  Well the past two years, and especially last night, that has not been the case.

The American League heading into the 2010 All Star Game had not lost since 1996.  Typically the AL boasts the more exciting offensive attack.  This year without question, despite the absence of a good few players that were selected, the AL possessed the much more lethal lineup.  I mean, between the Yankees and Red Sox alone, there may be more pop than half of the National League combined.

So over the course of the past 15 years, the AL has dominated the All Star game.  Not anymore.  Pitching has been rediscovered.  And the NL, largely in part to the NL East, has the better overall pitching.  Though it should be noted that AL aces, Verlander, Sabathia, and Beckett were unavailable on this night.  Despite studs being unavailable, the NL still had a better pitching group.

Last nights game was vastly overhyped.  There was little to no excitement.  Many star players did not even show up.  But it definitely demonstrated the fact that pitching has unquestionably regained the upper hand on hitting.

Since 2003, when this game began determining home field advantage, no Fall Classic has gone seven games and this normally highly anticipated event has entered the NFL Pro Bowl or NBA All Star game category.  A way overhyped showcase that no longer gets the competitive juices of its participants flowing or the country on the edge of their seats.

Maybe Selig should just nix interleague play and this game would regain some of its former luster?