Somebody please explain the current WTA tour to me? 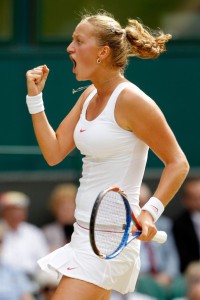 Photo courtesy of zimbio.com. Petra Kvitova (pictured above) is your 2011 Women's Wimbledon Champion.

I am a guy by all means that is for unpredictability, parity, and all of that good stuff.  As Andy Roddick recently said, “Sports would be just like watching a DVD,” if they were predictable.  But hands down, women’s tennis these days is the most unpredictable sport in the sporting world.  I feel like predicting a champion is like throwing darts or picking straws.  You better not have any rhyme or reason for your picks, because they most likely will not come true.

Earlier today, little known Petra Kvitova easily handled a heavily favored Maria Sharapova.  And for my non tennis die-hards out there, I can pretty much guarantee that you never heard of Petra Kvitova until the past couple of days, or perhaps even this morning.  Sharapova was my pick before the tournament started to take home the women’s title.  So when she got to the championship match and was taking on a much lesser known opponent, who was 21-years-old and had never been past the quarterfinals in a Grand Slam until this week, I thought that it was a no brainer.  There is no such thing as a no brainer in women’s tennis these days though.

Maria had not dropped a set all tournament.  Six double faults later, and a flurry of unforced errors, Sharapova’s shot at a 4th Grand Slam title and her first in over three years came to an unhappy end.

Please somebody explain the current scope of the WTA tour to me.

-We currently have a number one player in Caroline Wozniacki that has been to one Grand Slam final in her career, meaning she has zero major titles.

-Justine Henin, the former number one player and clay-court specialist has been retired for around six months.

-The Williams’ sisters are not a shell of their former shelves as they enter the twilight of their illustrious careers.

-Kim Clijsters, the current number two player in the world cannot decide if she really wants to step up to the plate and be the face of the women’s game or not.  Plus she has a Greg Oden type of injuryitis lately it seems.

So who will step up and take over women’s tennis?

Nobody knows.  And frankly, from an American standpoint, almost nobody cares.

Speaking of American tennis, at least we have the dynamic tandem of the Bryan brothers still running things on the doubles tour..

6 responses to “Somebody please explain the current WTA tour to me?”