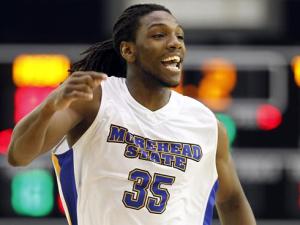 Just as any sane person should consciously avoid grape popsicles (I don’t care how hot it gets, I won’t settle for grape), if I’m an NBA GM, I’m avoiding taking these prospects:

1. Jonas Valanciunas, Lithuania: The 7-footer is rather lanky for a player of his height and he doesn’t seem the type to break the stereotype of “soft” European big men. Sure, he might have great technical ability, but until he bulks up, this 19-year-old seems more likely to be the next Darko rather than Dirk.

2. Bismack Biyombo, DR Congo: There are question marks surrounding how old this African talent is, although he assures scouts that he is 18 years old. Coincidentally, I have questions as to whether Biyombo is a legitimate first-round talent. Apparently, he has huge upside to become a pro with exceptional defensive prowess, but this relative unknown may just be the beneficiary of his triple-double performance against the USA when he suited up for the World Select Team at the Nike Hoops Summit.

3. Tristan Thompson, Texas: It pains me to doubt a fellow Canadian, but Thompson’s biggest draw seems to be that he is a big man with a left-handed shot. He is thin, didn’t lead his Longhorns to any monumental accomplishments, and he’s only considered a lottery pick because premier underclassmen power forwards in college, such as John Henson, Jared Sullinger and Terrence Jones unexpectedly decided to return to school. He, along with fellow Canadian and former Texas teammate Cory Joseph, should’ve stayed in school if they cared more about developing their game rather than cashing in on a NBA paycheck.

4. Jeremy Tyler, USA: An international player of sorts. Tyler is a unique case in that he committed to play college hoops at Louisville, then reneged and opted to play professional basketball overseas. Tyler’s time in the Israeli pro league was a failure. Following his pilgrimage to the Holy Land where he fell into basketball obscurity, Tyler opted to play in Japan last season and, lo and behold, he averaged about ten points a game. What a superstar.

5. Kemba Walker, Connecticut: Walker is a must-miss prospect only if the team that drafts him expects a natural point guard. I don’t see Walker as a floor general capable of running an NBA team in the way Steve Nash or Chris Paul does. Sure, he’ll score 20 points a game (after jacking up at least 20 shots, naturally) and give you four assists (guys with New York swag don’t pass up the damn rock!) with a handful of turnovers (because he’s undersized and will be knocked off the ball much easier in the NBA). Walker is the next coming of Monta Ellis, which is not necessarily a bad thing, but when was the last time you heard a player say they wanted to emulate Monta Ellis?

However, despite all these grape prospects here are a few potential steals:

1. Kenneth Faried, Morehead State: Faried finished as one of the nation’s top-three rebounders the past three seasons; last year, his senior year, Faried averaged an NCAA-best 14.8 rebounds per game and led the Eagles to an NCAA Tournament upset over intrastate foe Louisville. His offensive game might not be NBA ready, but rebounding ability tends to directly translate from the college to the professional game.

2. Kawhi Leonard, San Diego State: Leonard was an unheralded recruit out of high school and the tweener flew under the radar all season during the Aztecs’ best season in school history. However, now the player with little hype, but a constant motor, is projected to go as high as No. 5 to the Toronto Raptors in some mock drafts. He may not be the most talented, but his effort may compensate for what he lacks in natural ability.

3. JaJuan Johnson/ E’Twaun Moore, Purdue: These former Boilermakers were key recruits in the rejuvenation of the Purdue program in recent years. Scoring guards are more common than power forwards with skill, so Johnson has the better chance to get drafted, but these are the epitome of four-year players who deserve a legitimate shot to make good on a professional career.

4. Norris Cole, Cleveland State: The diminutive point guard scored, rebounded, and was a playmaker during his senior year. Yes, Cole was playing in the Horizon League, but you don’t put up monster numbers if you can’t play basketball. And the NBA needs more players with Hi-top fades.

5. DeAndre Liggins, Kentucky: The Cats’ incoming No. 1 recruiting class likely diminished the opportunities Liggins would have had during his senior year, but after speaking with Liggins several times throughout season, the arrival of his son in February probably more heavily influenced his decision to enter the draft. After a rough childhood in Chicago, Liggins wants to make sure he can provide for his family. Likely a second round pick, if Liggins gets drafted into the right situation, he could become a valuable asset to a team. Liggins’ offensive ability is inconsistent and not NBA ready, but he plays defense with a passion like few others. He could easily be molded into the a team’s defensive stopper given a good situation.