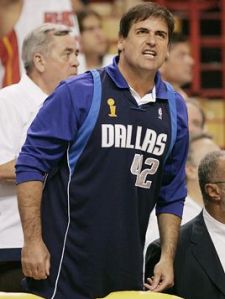 It has been another wild past couple of days.  So many major headlines.  So much exciting action.  Here are the items that have caught my attention.

I am still utterly shocked by the results of Sunday night’s game 6 of the NBA Finals.  The MonStars were defeated handily by the Mavericks.  How often outside of the movies do the good guys actually get the best of the bad guys?  I am by no means a Mavericks fan.  But as I have said many times before, there are sports fans, and then there are fans of the Miami Heat.  Therefore, I was happy with the outcome.

The playoffs this year were absolutely amazing.  We have really been spoiled this Spring/Summer basketball wise.  March madness was absolutely insane and quite possibly the wackiest it has ever been.  And then these NBA playoffs were the best in recent memory.  So what if there was only one game 7.  Sure we love game 7 winner take all matchups.  But these playoffs kept the American public at the edge of its seat from start to finish.  And anybody who says that they had Dallas winning the title at the beginning of the year, or even at the onset of the playoffs is full of it.  It was a remarkable run by Dallas.  Coach Carlisle did an exceptional job at playing his team’s strengths and utilizing his entire bench.

Apparently Mark Cuban slept with the Larry O’Brien trophy.  What is the celebration in Dallas going to be like? Cuban is personally funding the victory parade/party.  And let’s be real.  Mark Cuban goes big or goes home in everything he does.  This party is going to be absolutely ridiculous. Now the real question in my eyes.  Is Mark Cuban the best owner in the NBA?

Sure he is the most well-known due to his usual lack of shyness towards the media.  But the stats speak for themselves.  Cuban took over a crumbling franchise back in January of 2000.  When Cuban took over the Mavericks, Dallas had won just 40% of their games in the previous 20 years.  They also sported a less than respectable playoff record of 21-32.  Since the Cuban era began, Dallas has won over 69% of their games, been to the playoffs ever year, appeared in two NBA Finals, and now have won a championship.  Enough said.

Over the past couple of weeks the Dallas Mavericks were America’s team.  At least one version of America’s team out of Dallas is winning championships.

Lane Kiffin recently appeared in court in front of the NCAA regarding recruiting violations while coach of the Tennessee Volunteers.  Kiffin is now the Head Coach of USC.  Rumor has it that USC may receive some of the penalties due to Kiffin’s prior transgressions.  This is absolutely ludicrous.  Fine Kiffin.  Punish him personally.  Do not punish a school that is already dealing with enough as it is due to mishaps of former coaches and players.

One of the glaring flaws of NCAA litigation is the inability to punish the perpetrators directly at times.  Generally, violations regarding players and coaches come out years after these coaches and players have left their respective programs.  Then the universities pay the price for their former coaches and players poor decisions.  At times, there is no other way that the NCAA can dole out a punishment.  But in this scenario.  They can fine Lane Kiffin directly.  Do not make USC suffer for poor decisions made in Rocky Top.

Now I am sure Kiffin has already been playing in the grey area while at USC.  But until any evidence formulates, there is no facts to this hunch.  Punish Kiffin.  Do not punish USC.  Enough is enough.

What happened to LeBron James in the NBA Finals?  I realize that this story has already been beaten to death.  But I still have not gotten a definitive answer on what happened.  The numbers do not lie though.  In the regular season, King James was second in the League in scoring at 26.7 points per game.  In the NBA Finals, his scoring outputs by game were 24, 20, 17, 8, 17, and 21.  He never even hit his regular season average.  The NBA Finals is when players define their legacies.  Just ask Michael Jordan and Kobe Bryant about that.  I guess LeBron missed the message.

If I am Dwyane Wade, I am extremely upset with my partner in crime, LeBron James.  Not only did LBJ struggle to score the ball, his defensive effort was not there.  Wade went 100% on both ends of the floor the entire series.  It even looked like he was a bit fatigued towards the end of Game 6, which would make sense.  LeBron did not look tired. He looked disinterested.  Especially in the 4th quarter.

Sure Dallas had a good team.  But they had absolutely no business defeating the Heat in a seven game series.  On the offensive end, LeBron appeared to be playing hot potato all series, especially in the 4th quarter.  How can the supposed best player in the world not want the ball in the 4th?  And on the defensive end, he just was not making plays.  King James is a first team all defensive guy year in and year out.  Yet the plays we are accustomed to seeing him make on a nightly basis just did not happen in this series.

I am not sure what happened to LeBron.  I really do not understand how a guy who appears to be the best player in the world can all the sudden not be himself for three or four straight games.

Off games happen.  Off series for superstars do not.