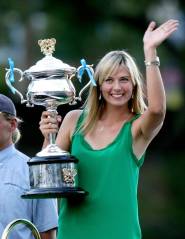 We have hit the 4th round of this year’s French Open.  And the talk of the tournament at this point, other than Nadal’s relentless pursuit of Bjorn Borg and Djokovic’s chase of  the #1 ranking/historical win streak, has to be the absolute “madness” on the women’s side of the draw.

Anybody who claims they saw both Wozniacki and Clijsters going down by the end of Round 3 is full of it.  These two women were the top ranked players on tour for a reason. Admittedly, the depth of the Women’s tour at this time is scarily weak.  With the recent health issues for the Williams sisters and the 2nd retirement of Justine Henin (no she is not Brett Favre), nobody has really stepped up to the plate.

It is hard for me to say, but there is not really a whole lot of fan appeal to the Women’s game at this time.  People say they love parity in sports, and they do.  But do you really love a Tour where there is really no big names?  Nobody that really stands out?

Currently at Roland Garros, there are 3 players that stand out to me in this wide open field:

No. 28 Seed, Daniela Hantuchova:  She has been irrelevant for some time now.  And has always been considered a grass court player.  But with recent events, she seems to be in the picture to have a legitimate shot to take it home this year.  With a career high-ranking of No. 5, she knows what it takes to play with the games elite.  After absolutely dismantling top-ranked Caroline Wozniacki, do not sleep on the former Slovakian star.  This may be the last real shot of her career to take home a Grand Slam Title.

No. 5 Seed, Francesca Schiavone:  Last year’s champion appears to have picked up right where she left off in Paris.  Schiavone is a great clay court player.  She has been one of the game’s elite clay court stars for over a decade now.  With a win here, she has a chance to reach the No. 4 world ranking (her career high), or maybe even higher.  She has not dropped more than three games in a set thus far at Roland Garros and really appears to be on her A game.  She is definitely one of the favorites to take it home at this point.

No. 7 Seed, Maria Sharapova:  The beautiful Russian is my odds on favorite to take it home at this point.  Many have forgotten about Sharapova due to the fact that she has not won a Grand Slam title since 2008.  Plus she has always been known for her power game and grass court prowess.  But with the field wide open at this point and with a legitimate shot to complete the Career Grand Slam, do not sleep on the tall, power-hitting, Russian star.  Plus, she avoids the defending champion Schiavone until the Finals.

The call here is a Sharapova/Schiavone Finals matchup.  Maria will complete the career Grand Slam come next weekend and vault herself into the exclusive group that have completed the Career Grand Slam.

This entry was posted in Uncategorized. Bookmark the permalink.