The smarts of Knight or the pure talent of Walker? 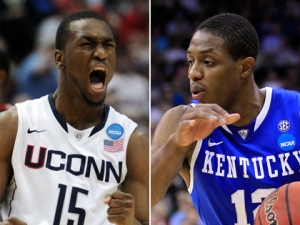 Your team needs a distributer, the central component to a successful NBA team.This upcoming draft class is about as questionable as the NBA actually having a 2011-12 season, but there is plenty of potential for some diamonds in the rough. Among them lies the big question: who is going to be the top point guard- Kemba Walker or Brandon Knight?

ESPN’s Chad Ford weighed in, saying that he would take Kemba for the short term, but an NBA team that wanted a PG for the long haul should take Brandon Knight. In a follow-up question, Ford said the same when comparing Knight to Jimmer. It seems that prospects are seeing quite a bit of potential in the freshman guard out of Kentucky, but is taking him over the UConn veteran a bit bold? No. And here’s why. END_OF_DOCUMENT_TOKEN_TO_BE_REPLACED