Reverend Ray Lewis speaks out on the value of the NFL, and himself 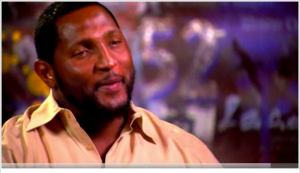 Ray Lewis is right. The NFL is necessary. In an interview with ESPN, the Ravens pro-bowl linebacker spoke on the importance of the NFL to this country. Maybe declaring that there would be a significant increase in crime is a little bit dramatic, although a small spike would be no surprise. Hell, if the Cincinnati Bengals alone weren’t on the field for a season you could expect an increase in crime.

But what the Reverend Ray Lewis means is that it gives the people something to do. It’s an escape from a world that’s riddle with tsunamis and tornados, wars and politics.

Baseball may have been this country’s favorite pastime, but its being replaced. The NFL is not only the most lucrative professional sport there is, but that’s only a result of it becoming the most loved.

The appeal of the NFL lies in its simplicity. There are 32 teams. Plain and simple. The stars are accessible, and you can familiarize yourself with only the stars or the entire roster, making it accessible to the widest range of followers.

It’s a sport you can wrap your teeth around because the games are on same two days during the season, on the same three channels. You don’t have to burden yourself with a pocket schedule, you know when your team plays every week,

The NFL is the most intense sport the US has to offer. I’d rather see Ray Lewis hit someone with more force than a Swat Team battering ram than any other play in sports.  It’s the intensity of the game, the balance of talent in the league, the perfectly spread out season and the best playoff system in sports that make the NFL the best professional sports has to offer right now.

That was a part of Ray Lewis’ message. The other part? The same as always. He doesn’t want you to miss out on the Ray Lewis show.  The linebacker just celebrated his 36th birthday last week. Wrap your head around that while considering that he is still one of the best in the game. Ray Lewis has few precious years left, and according to him, the Ravens are “minutes” away from a championship. He doesn’t have time to spare. He wants to lock in his second Superbowl, and as his age goes up, the Ravens’ chances go down.

One thing is for sure. The linebacker’s charisma is undeniable. He is a speaker. A preacher for the sport. For him not to coach in some facet when his career ends somewhere here in the next four years would be a crime. He is essentially already a coach right now, the undeniable locker-room leader of the franchise and he has been for 15 years.

As the interview was winding up, Sal Paolantonio asked the inevitable question. “What are you gonna say at training camp when I say ‘You’ve lost a step Ray, you’re not the same player you were.”

“And fifteen years later and twelve pro bowls later, guess what I’m gonna keep saying. Keep watching. It only gets better … Ask the people that play against me if I’ve lost a step.”

Matt Murray is the Editor in Chief for the University of Kentucky’s student-run newspaper, the Kentucky Kernel. You can follow him on twitter @MurrNation

12 responses to “Reverend Ray Lewis speaks out on the value of the NFL, and himself”