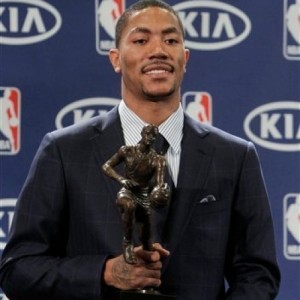 Derrick Rose (pictured above) did not play like the NBA MVP tonight. Our very own Bull's expert Wesley Kaminsky feels that Rose is due for a huge performance in Game 3.

For the Bulls, and their fans, things could not have gone better after game ones 103-82 thumping of the Heat. The Bulls had dominated the Heat in the second half, led by their defense, and glass domination. Oh yeah, and also two Taj Gibson exclamation point dunks. You could say it was a perfect three days in Chicago from Sunday to Wednesday night up until Luol Deng drilled a half-court shot to end the first quarter. The Bulls led 26-19 after one, and from then, it was all down hill.

The Heat responded with a big second quarter, out-scoring the Bulls 29-20 to take a 48-46 lead at half. The Bulls were struggling to score, specifically the MVP Derrick Rose, and this was just a sign of things to come. The Bulls shot just 34% on the night, in addition to going 16-26 from the foul line. Derrick Rose, who has gotten to the basket at will all season long, went 7-23 from the field. The Heat defended him beautifully, and Rose could never get in any sort of rhythm. It was nauseating to watch, in fact.

However, the story of the night for the Heat was the resurgence of Udonis Haslem, who had missed much of the season with a foot injury. Tonight, Haslem provided the toughness it seems the Heat had been lacking, scoring ten points in the third quarter, including two statement dunks. He was doing all the little things for the Heat, scooping up offensive rebounds, and making mid range jump shots. After tonights performance, if Haslem continues this, could he be the piece that this team was lacking to win a championship? If he plays like he did tonight, the Heat’s chances are looking better and better.

What comes next for the Bulls after this? Should they panic? The answer to that question is a simple no, they should not. Given how poor they shot, the Bulls were right in this game up until about two minutes left. Do not expect Derrick Rose to struggle that badly next game in Miami, you can assure yourself he will be playing with fire on Sunday. When the Bulls have lost games this year, it is generally because nobody else besides Rose can step up on offense, and that was again the case tonight. Luol Deng finished with just 13 points after a hot start, and was the only other Bull in double figures other than Rose. For the Bulls to have any chance of winning this series, the play of Carlos Boozer needs to improve dramatically. I know he is battling turf toe, but this is the playoffs, everyone is battling something. Thankfully they have Taj Gibson to fill the role of Boozer. In addition to Boozer, the play of Kyle Korver needs to elevate. I’m a big Korver fan, but when he isn’t hitting threes, he is kind of useless out there. He desperately needs to find his rhythm.

The Bulls have a lot of time to regroup for game three, and will need to sustain energy throughout the game if they want to steal one in Miami. I still Bull-ieve Bulls fans, do you?