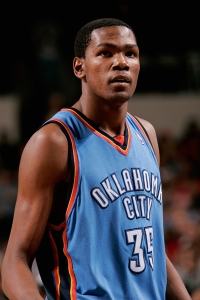 Sunday afternoon will be a big day for the Oklahoma City Thunder as they look to advance to their first conference finals since 1996 (they were the SuperSonics then). Expect Kevin Durant (pictured above) to play a large role.

The Memphis Grizzlies continue to shock the world with their never say die mentality.  They went into halftime staring elimination in the face.  Memphis had the look of a deer in headlights.  Down by 10 with 24 minutes of basketball to go.  Randolph, Mayo, Conley and Co decided that the ball was not going to strike midnight yet on the current Memphis magical ride.  And they made sure it didn’t.

I will say that the time is 11:59PM though.  Midnight is not far away.  But I must tip my hat to this outstanding group out of Memphis.  They have been simply sensational in the postseason and have really exceeded all expectations.  This was one of those teams that appeared to be 2 or maybe even 3 years away from really contending in the mighty Western Conference.  The talent is there.  But no team can contend for the title in the NBA on raw talent alone.  Team chemistry and experience are the differentiating factors of good teams from great teams.  The Grizzlies have proven to be ready to compete now and currently find themselves one game away from a dream matchup with Dallas in the Conference Finals.

Sadly for Memphis though, logic does not seem to be pointing in their direction as we get ready for the first Game 7 showdown of this year’s version of “May Madness.”  The Grizzlies have done a phenomenal job of protecting their home floor in the playoffs, sporting a very solid 5 and 1 record.  Their lone loss on the home turf came in a triple overtime thriller that was an instant classic.  Sadly though, the Grizzlies have not fared nearly as well on the road going 2 and 4.  Also, in the regular season, the Grizzlies were not exactly road warriors going 16 and 25 away from the friendly confines of their home arena.

Other logic pointing against Memphis.  Kevin Durant (KD) scored just 11 points last night.  His lowest point total since late February of 2009.  Durant has quite possibly turned into the best player in the NBA, or at least the best scorer, and will not go down without a huge performance on the Game 7 stage.  KD has been waiting for his breakthrough moment in the playoffs.  Well Sunday is his chance.  And you got to think the guy is going to be ready to take advantage of the big stage in a big way.  Lastly, OKC went 30 and 11 at home on the year and are 5 and 1 in the postseason in their home arena.

With all that being said, I have to go with the Thunder to take Game 7.  It has been a magical run for the Memphis Grizzlies.  But every fairy tale has to strike midnight at some time.  Just ask the 1999 New York Knicks.  And for Memphis, that time is Sunday.

2 responses to ““Grizzlies or Thunder?””