“Is This the End of the Laker Dynasty?” 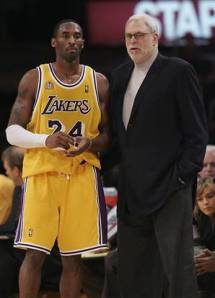 The Kobe and Phil Laker Era appears to be coming to a close. Will it be a happy ending?

The door is almost shut, but it is not entirely closed yet. Anybody who says they saw this coming is full of it.  I realize that Charles Barkley makes his outrageous and obnoxious picks, and makes sure you know it.  But outside of Sir Charles, who I struggle to give credit for predicting this, I do not know anybody who saw this coming.  Things were not supposed to end like this.  This was supposed to be the epic finale to Phil Jackson’s illustrious coaching career.  It was supposed to be Kobe’s time to tie the greatest player of all time with his 6th Championship ring and to start the arguments of whose the greatest.  Everyone knew the LA Dynasty was heading down the home stretch.  But nobody foresaw it ending before June.

There have been many criticisms surrounding the Lake Show as of late.  The following are some of the rips on LA.

-The aging superstar (Kobe) cannot cut the mustard anymore.  Bryant has lost his touch and is no longer the best closer in the game.

-Pau Gasol is playing softer than he did in the 08 NBA Finals.

-LA appears to be a 6 man team.  What happened to the deep and experienced bench?

-Should Kobe just run the point?  Blake and Fisher do not appear to be deserving of significant minutes.

Even internal questions are arising from young bloods like Andrew Bynum.  Bynum has stated to the public that this team has trust issues.  Well I will state this.  It would be hard to trust Bynum as a teammate in that he plays every other week (due to injuries)  Just call Bynum a bi-weekly player.  Looking back I was one of the guys that was against the Lakers trading for Carmelo.  I felt they needed the 7 footer Bynum.  Maybe I was wrong.  Either way, Bynum should have never made a comment like that publicly.  Internal issues should always stay internal.

You could criticize the Lakers all day.  But one fact has remained constant during this outstanding 4 year run in LA.  This team always knows how to step up to the plate when their backs are up against the wall.  Well their backs are up against the wall right now and the wall appears to have a shaky base.  Never during this run have the Lakers looked to be in so much trouble.  Outside of the Game 6 embarrassment in the 2008 NBA Finals, things have not been this bad in some time.

Now after saying all of that.  Doesn’t this seem like the perfect scenario for Kobe and Phil?  One last chance to show the world that they are the greatest winners in the game currently (as a coach and player).  Believe me.  Phil wants to go out on top.  I honestly could see Phil coming back if he does not end up with a title come mid June.  But that is a story for another day.

Now Dallas is a very good team.  I mean they won 57 games in the regular season, which is the same exact number as LA.  They have a superstar in Dirk Nowitzki, who is the best shooting 7-footer of all time.  And will go down as possibly the greatest non-American player of all time.  A sure-fire first ballot Hall of Famer.  They also have an owner that wants to win as much or more than any owner in professional sports.  Mark Cuban is a man who any common man can confide in. He is just a normal guy who loves sports.  And who happens to have an outrageous amount of money.

With all that being said.  Dallas has a history of choking in the playoffs.  They blew a 2-0 lead versus Miami in the 06 NBA Finals.  Also the following year they won 67 games, and then got their world rocked by a mediocre at best Golden State team in the first round of the playoffs.  Since then, Dallas has not exactly been playoff warriors.  Losing in the 08 first round to New Orleans, and then getting destroyed by the Nuggets in the 09 2nd round.

Now I realize the odds are stacked long and high against the Lakers in making a comeback in this series.  In playoffs history, teams going down 2-0 in a best of 7 series has been a near death wish.  From 1969 to 2003, only 7 teams escaped to the next round or to win the series after being down 2-0.  Luckily for LA, the odds have gotten better in recent history.  Since 2004, 7 teams (the same number as in the prior 35 years) have survived a 2-0 deficit to win the series.  Now as for teams that lost the first 2 games at home.  Only 3 teams have climbed out of that hole, including the 1971 Lakers.  Could LA make this happen for the second time in franchise history?

You better believe it.  LA’s dynasty is not over yet.  It may be after mid June.  But this story book ending for Phil, Kobe, and the crew will go as planned.  Dallas is a very good team.  But LA and Dallas’ playoff history set up the perfect scenario for LA to shock the world and come back.  Expect the Lakers to play inspired basketball and win this series in 7.

The hardest thing to do in sports is to close a team out and deliver the knockout punch.  I do not think Dallas can close the deal.

Come mid June, the Lakers will be celebrating a 3-peat.

13 responses to ““Is This the End of the Laker Dynasty?””