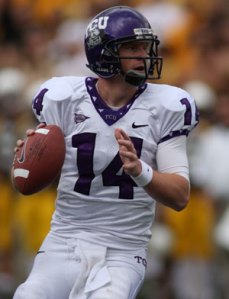 Our very own Grant Freking thinks that Andy Dalton (pictured above) will start from Day 1 in Cincinnati. Will he become the new face of the Bengal's organization?

These two represent the future of the franchise. Both will likely start from Day One (provided the Bengals don’t sign another quarterback) and represent a new era in Cincinnati, which also means that the Carson and Chad era has ended. While Dalton isn’t excellent in any physical area, he does possess great intangibles and decision-making abilities in crunch time. Green is a physical freak of nature who has fly-catcher hands. He doesn’t have top-end speed but that should be negated by the presence of speedster Jerome Simpson on the opposite side of the field in addition to Jordan Shipley in the slot.

What not to like: lack of depth on offensive and defensive line, safety

Georgia guard/tackle Clint Boling was the Bengals only pick on either offensive or defensive line, areas where the Bengals are in desperate need of talent and depth. Cincinnati’s offensive line is particularly weak outside of left tackle Andrew Whitworth. Left guard Nate Livings is below bar, the jury is still out on center Kyle Cook and right tackle Andre Smith, and right guard Bobbie Williams is aging fast.

On the other side of the ball, despite the rise of Carlos Dunlap, Geno Atkins and Michael Johnson, the Bengals need more pass-rushing help. Pat Sims and Domata Peko are solid run-stuffers but don’t penetrate the pocket.

The safety position is in shambles. Roy Williams is a free agent and won’t be back, nor should the Bengals want him back. Chinedum Ndukwe is also a free agent, which leaves Reggie Nelson as the lone cog at safety. That’s a problem.