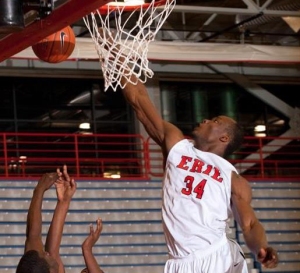 I realize that the NFL Draft is only a few hours away.  I will be glued to my television set just like everyone else in hopes that my team will set themselves up well for the future.  Lets hope that future is sooner rather than later (things are beginning to look that way).  But in College Hoops today, Steve Lavin and the Johnnies received a big time commitment.

Word has gone out that “God’s Gift” Achiuwa has chosen to take his talents to the Big East next year, sporting a St. John’s jersey.  If this kid is really a Gift from God, Steve Lavin may have hit the jackpot.  Even without the “gift,” Lavin may have already hit the jackpot.  With 8 guys already making up ESPN’s 3rd ranked recruiting class prior to this commitment, things are looking good for the Red Storm.

Now I realize that many attributed Lavin’s instant success in New York to a very senior laden team that always had the potential, but never the direction.  And I completely agree with that.  Lavin though, as I have said in prior posts on this very blog (https://sportskraze.wordpress.com/2011/02/19/steve-lavin-a-genius/) knew exactly what he was walking in to.  What reason would Lavin have in walking into a “once prestigious” program with a bare cupboard.  Lavin knew the cupboard was not bare at St. John’s, and he took full advantage of what was given to him.

Now realizing that the cupboard was not bare, Lavin also saw great potential in being a recruiting giant from Day 1.  When a team wins, players want to come there.  So Lavin, knew he could win from Day 1 in New York, and this would make recruiting all that much easier.  Not to mention, New York is the best basketball hotbed in America.  Across the board, more of America’s top talent on a yearly basis comes out of New York, than any other city in America.  In addition, outside of John Calipari, Coach Lavin may be the best recruiter in America.  He also may sport the best hair (outside of Cal as well).

So now it appears Lavin has struck gold.  I mean he has locked in “God’s Gift.”  A highly touted JUCO player who should have a pretty smooth transition into big time Division 1 College Basketball.

Last year we had “Jimmer Mania” and the “Kemba Show.”  Now I am not going to put this kid in that type of company yet (or possibly ever).  But his name has to be up there with the best names in College Basketball.  I mean seriously, how would you like for people to refer to you as “God’s Gift” all the time?

I do know this, Dick Vitale, Jay Bilas, and the entire ESPN College Basketball crew will discuss God’s Gift at some point next season, whether he performs or not.  There is no way to ignore the name. I see this kid being a very solid fit in Lavin’s system, and I know that both Cincinnati and Washington were very bummed not to get this guy.

Can you honestly think of a better name in College Basketball as we look ahead to next season?  Even if you are unable to, feel free to share some other top names.

One response to ““Next Year’s Best Name in College Hoops””