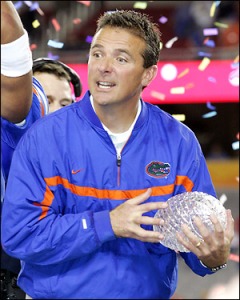 Do not be surprised to see former Florida Gator Head Coach Urban Meyer (pictured above) patrolling the sidelines in Columbus in the near future. It is turning into a real possibility as more Tressel allegations continue to arise.

What is not going on in sports this week?  Playoffs, MLB Action, NFL Draft Mayhem.  It is a crazy week in the world of sports as was noted in yesterday’s version of the “Weekly Nickel.”  But here are the main topics that have been catching my eye.

Could it be Meyer Time in Columbus?

The past 6 months have not been good for the Ohio State Football program.  But the past couple of months have been especially rough for the Ohio State General, Head Football Coach, Jim Tressel.  Things have gone from very good, to bad, to now really bad.  The guy has now become a villainous figure.  He was once the beloved saint that patrolled the Ohio State sidelines with an old school demeanor and an old school wardrobe (sweater vest).  Now Tressel is facing more and more serious allegations from the NCAA as information becomes available.

Who would have thought the saint could wreak this sort of havoc?  Either way, no matter what officially comes from all of this, I do know one thing.  Your next Ohio State football coach will be Urban Meyer.  And it may be coming sooner than anyone ever envisioned due to the recently heightened severity of Jim Tressel’s misconduct.  Many have been at Tressel’s throat for years now, even though he has won 6 straight Big Ten titles.  He has failed to win the big one since leading the Buckeyes to an improbable National Championship in 2002.

I for one have been somebody that has said for a long time now that Tressel’s conservative nature would never allow Buckeye nation to reach its full potential in this day and age of pass happy offenses.  Innovative play calling and fast paced styles are what wins National Championships these days.  And though Ohio State always features great athleticism, Tressel always seems to play a “not to lose” style of football.  Well he may be conservative and old school with his play calling.  But apparently he is not old school and by the book in how he lives his life.  The man has been dishonest.  And for that, even if some of the NCAA rules are ridiculous, I show no remorse.

Now back to my point about former Florida Coach Urban Meyer.  I really see this as the one job that would get the former National Championship Head Coach out of the television studio and back onto the field.  Meyer hails from Ohio and has always been a Buckeye fan.  In addition, he has served as a graduate assistant at the Ohio State and would love nothing more than to take over the program that he holds so near and dear to his heart.  Do not be surprised to see Meyer take over the Ohio State program within the next 2 years depending on what else transpires in the Tressel saga.  Originally, I thought this was a far-fetched rumor.  Now it is turning into a reality as the allegations towards Tressel continue to heighten.

The NBA Playoffs thus far have been nothing sort of amazing.  And you better believe that they are going to continue to get better as we delve into the later rounds.  One eye-popping story going on is the reemergence of Chris Paul.  Many have overlooked the injury prone point guard over the past couple of years due to his inability to stay healthy.  Well the man looks pretty healthy right now, after putting up a triple double against LA on Sunday to even up the series with the heavily favored Lake Show at 2 apiece.  Now I am not saying that the Hornets will win this series by any means.  But I am saying that there should definitely be some talk of Chris Paul possibly being back to that elite point guard status.  A guy that deserves to be in the same discussion as the “to be” MVP, Derrick Rose.

CP3, as many call the Hornet’s Point Guard, played at an MVP level in both the 07-08 and 08-09 seasons.  He was truly playing with a Chris Paul mind state as the famous rapper the Game says in one of his songs, “Gotta Chris Paul mind state, I’m never outta bounds.”  The man could do no wrong and was unquestionably the best point guard in the world.  Sadly, the injury bug struck in 09-10 limiting the star to just 45 games.  Many had forgotten about CP3 at the beginning of this season.  And though his stats on the year are a bit down from his career numbers, he has saved his best for last.

The “to be” MVP, Derrick Rose on the other hand, is pressing a bit.  Going just 10 of 40 from the floor in his past 2 games and 5 of 29 from 3-point range in the series.  Dare I say he is beginning to bare a striking resemblance to Allen Iverson of the late 90s and early 2000s?  I am not taking anything away from the amazing year that Derrick Rose has had.  He is hands down the League MVP.  But definitely do not forget about Chris Paul when talking about the best point guards in the NBA.  He should once again be back at the top of the discussion.