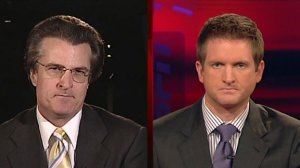 This is the big week for ESPN NFL Draft gurus Mel Kiper (left) and Todd McShay (right). You will be hearing these two go at it all week and into the weekend.

It is another Monday in the wide world of sports.  We have a stellar week ahead full of exciting action across the board.  Lets take a look at what the key events of the upcoming week will be.

5.  NCAA Basketball players have until May 8th to pull their names out of the NBA Draft pool.  Players had to declare by yesterday.  But if they have not hired an agent, they can still pull out.  There are a good few guys that I think would be best advised to pull out and return to school, but it is never an easy decision with all sorts of people in your ear.  Keep your eyes out to see if any big names decide to return to school though over the course of the next couple of weeks.

4.  The MLB is about 20 games in for most teams already.  Hard to believe that an 8th of the season is already in the books.  It has been a very entertaining, exciting, and unpredictable first month to say the least.  The Indians and Royals are still sitting atop the wide open AL Central.  The NL Central is a crazy cluster due to the Reds pressing as of late.  Troy Tulowitzki looks to be the front-runner for the NL MVP, while former Cincinnati Red’s ace and current San Diego Padre’s ace, Aaron Harang, has regained his former All Star form (stinks for the Reds).  Also Jered Weaver looks to be on his way to the AL Cy Young Award.  I could really go on and on talking about all of the storylines in month one.  But I will spare you.  Here is my matchup of the week.

Cincinnati Reds at Milwaukee Brewers:  After a huge 3 game set in St. Louis, the Reds get no break.  They get to visit the other divisional rival that is in the conversation, the Milwaukee Brewers.  Milwaukee made Ryan Braun’s Passover Holiday one to remember in extending his contract for another 5 years for 105 million.  Both of these teams can really hit the ball all over the park.  The team that will win this series is the one who gets the most quality innings from their starters.  The Reds have struggled as of late.  Look for them to flex their defending divisional champion muscles and lay a smack down in Milwaukee nabbing at least 2 of the 3 games.  If the Brewers want any chance in the Central, they will have to learn how to beat Cincinnati, who swept them in the season opening series.

3.  Barry Melrose, Matthew Barnaby, and the whole ESPN NHL crew have hardly gotten to sleep since the puck dropped 12 days ago in the playoff opener. This year’s playoffs have been full of drama and close calls to say the least.  And who would really want it any other way.  9 games have already had to go into extra time during the course of Round 1.  There is one game in particular that I am keeping an eye on at this point.

Buffalo Sabres at Philadelphia Flyers:  Game 7 of this epic series is set for tomorrow night.  This series has been simply crazy, with the last 2 games needing extra time to proclaim a winner.  The Flyers have struggled at home in this series losing 2 of 3.  But when it comes time for Game 7, the home ice generally makes a difference.  In the case of Philadelphia though, they had a better road than home record this year.  I am going with the Sabres, who were also a better road than home team this season.  All of the pressure is on the Flyers.  And it will show in what should be a great Game 7.  Look for Buffalo to pull the upset in Overtime.

2.  This year’s version of the NBA Playoffs has been nearly as unpredictable at times as the this year’s version of March Madness.  It has been “Totally awesome with a capital A!”  Many complain all year long about how pointless the NBA regular season is.  Well nobody is complaining at this time.  Teams are leaving it all out on the floor.  The top teams in the East, outside of Orlando have handled business.  Though I will state that I see the Magic shocking the Hawks and reeling off 3 straight still.  The West has been simply crazy, other than the 4/5 series, that everybody expected to be the crazy one.  Go figure.  The series that was overhyped has underperformed, while the other matchups have been gems.  Look for Dallas to sneak out of the first round in 7 over Portland.  But can San Antonio come back on the 8th seeded Grizzlies?

There is a reason why the Spurs are the one seed and there is a reason why this franchise has won 4 championships since 1999.  Randolph and the Grizzlies have looked great and are playing inspired basketball.  But do not expect it to last.  San Antonio will find a way to move on.  Round 2 will be another story though for the Spurs.

1.  I had to rank it number 1.  I know that the playoffs are going on in 2 of the other main professional sports.  But they are both still stuck in the early rounds.  Come Thursday night, the NFL will take center stage again.  And not for labor unrest or litigation.  It is one of the best weekends we have in sports.  The NFL Draft.  Get used to Mel Kiper and Todd McShay’s voices, because you are going to be hearing them loud and proud all week and into the weekend.  Despite the question marks regarding what is going to happen in regards to next year, the draft will go on.

Talk about a crazy week ahead.  Take it all in and enjoy all that is the wide world of sports.