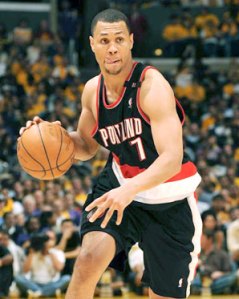 Portland Trailblazer's star Brandon Roy (pictured above) was back to his old tricks yesterday in leading Portland to a huge Game 4 victory over Dallas.

I will admit that I am not typically the fairy tale guru.  I also am not the type of guy that likes to cry at cliché moments or during tear jerker movies.  But yesterday in Portland, was truly a thing of beauty regardless of if you are a fan of the Trailblazers, the Mavericks, or some other NBA team.

As I have talked about before on this blog, Brandon Roy has always been one of the most talented players in the game since he was a rookie back in 2006.  The past few years though, have been a real life roller coaster for the former Washington Huskies star.  But there is one thing you can’t deny whether you are a fan of the guy or not, he is definitely one of the good guys.  An old school NBA star in a way.

First of all, Roy, spent 4 years in College.  Hard to imagine in this day and age for any star to stay in school all the way until graduation.  Who would have thought?  So he accomplished that amazing feat.  Then immediately upon arrival in Portland, he was a star.  Taking home the NBA’s Rookie of the Year Award, while averaging nearly 17 points a game.  But the train did not stop there.  The man was a shooting star.  Since, despite a plethora of major injuries, he has made the All Star team 3 times, and the All NBA 2nd and 3rd teams.  And want to know the best part about the 26 year-old out of Seattle?

He has been a great ambassador for the game of basketball both on and off the court for the duration of his career.  Despite many major injuries that have taken away large chunks of 3 of his only 5 years in the League, Roy has maintained a positive attitude and been a team player in Portland.

Now I will admit, yesterday was one of those games, where it was vintage Roy.  Brandon Roy, pre leg injuries galore.  Brandon did what an NBA Superstar is supposed to do late in a playoff game.  He put the team on his back, scoring 24 points in 24 minutes, including 18 big ones in the 4th quarter.  On the year, Roy has only averaged 12 points per game, which is nearly 7 points below his career average.  And just a couple of days ago, Roy, for the first time in his career, complained to the media about something.  He was hurt by the lack of playing time that Coach Nate McMillan was giving him.  Though, this was extremely out of character for Roy, I along with most understood where he was coming from.

Injuries can ruin a guys career or they can just be setbacks in a player’s career.  And yesterday was a prime example of how Roy, has not let injuries ruin his career.  They have just simply been a bump in the road for the 3 time All Star as he continues the uphill climb back to stardom.  Without question though yesterday down the stretch, the Brandon Roy star was back shining in Portland.

Roy’s play yesterday put a big smile on my face along with many others.

One response to ““Fairy Tale Ending””