“A Rough Go for Kobe” 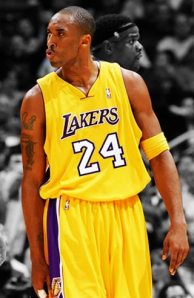 It has been a rough go for Laker's superstar Kobe Bryant (pictured above) over the past couple of days. Now it is playoff time and Bryant always has his game face on for the postseason.

The past couple of days have been an absolute whirlwind for Lakers superstar, Kobe Bryant.  First, a key piece of the Lakers championship puzzle, Andrew Bynum, goes down with yet another knee injury.  Then, later in the game, Kobe picks up a technical foul. But the technical was not out of the ordinary for Bryant, who is 2nd in the League this year in technical fouls to Superman himself, Dwight Howard.

Bryant frequently argues with referees and actually has ranked in the top ten in the League for technical fouls each of the past six seasons. I do not like when guys jabber at opposing players or whine to  the referees.  But I do respect Bryant’s drive and his ability to “Refuse to Lose.”  He is emotional.  The man just hates losing.  It is a trait that Michael Jordan had.  It is a trait that Tiger Woods had.  Losing is not something that any of these guys ever seem to think is possible.  So they each have had their fair share of temper tantrums over the years.  And do not think for a second that guys like Jordan did not cry to the refs or that the other stars in today’s game remain mum towards the referees.  It just isn’t true.  Stars complain.  And they complain frequently. END_OF_DOCUMENT_TOKEN_TO_BE_REPLACED