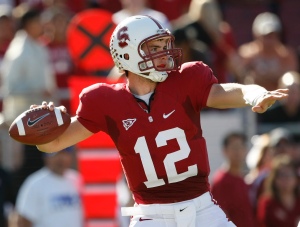 Spring Football is at full go all across the country. Andrew Luck (pictured above) appears ready to for another monster season. Could he lead Stanford all the way while taking home the Heisman?

The last couple of weeks have been absolutely insane in sports.  And this week will undoubtedly be fun, but it may not live up to the hype of the last couple.  No Masters.  No National Championships.  But still lots of action all across the board.

5.  Spring Games galore in the College Football world.  This is a very exciting time to see what the future holds for your respective teams.  And I will state that two teams really caught my eye Saturday.  Stanford and LSU.  Andrew Luck will be a definite front-runner to take home the Heisman this year.  Even though they lost a good amount from their offensive line of a year ago, they have a solid defense lead by the best linebacker in the country that you have never heard of in Shayne Skov, and an array of big time weapons offensively.  Do not expect Oregon to cruise to a repeat in the PAC 10.  It will be a definite two team race for the top spot.  Then the other game that really caught my eye.  Lets go down to Baton Rouge.  LSU could be “the team” out of the SEC next year.  And as you know, the SEC has produced the past 5 National Champions.  So you do the math.  One guy to keep an eye on for the Tigers as you look ahead to next year is sophomore to be Spencer Ware.  Ware is a Cincinnati native, out of Princeton High School, who has the look of the next big time LSU running back.  Ware gave the country a taste of his abilities with an amazing performance in last year’s Cotton Bowl.  If yesterday was any indication, Ware will be grinding out yards and scoring touchdowns for the Tiger’s in the Fall.  Boy did he put on a show yesterday rushing for 94 yards and 2 TDs.  Beware of Spencer Ware next year.

Could we be looking at a Stanford versus LSU National Championship Game come January?  It is not as far fetched as you may think.

4.  The NFL Draft is just over 17 days away.  And sure, we have no idea if games will get played come September, but we do know that players will get drafted in a little over 2 weeks.  Who else is ready for some crazy insight from Mel Kiper and Todd McShay?  Well I know this much.  I would rather hear their draft analysis and projections then hear more about the labor unrest and the Brady versus the NFL Court case.

3.  It is playoff time in the NHL.  And yes I realize that the majority of you, unless you are hockey fanatics, will not flip on a game until at least the Conference Finals.  But there is plenty of excitement in store.  A few key items to watch for.

-I would expect either the Flyers or the Penguins to make it out of the East.  Due to injuries though, I am going with Philadelphia to represent the Eastern Conference in the Stanley Cup.

-In the West, do not sleep on the San Jose Sharks.  Could this be the year they finally live up to expectations?  I do see them making it to the Conference Finals.  But ultimately, I will take my chances on the top seeded Canucks to not only win the West, but the Stanley Cup as well.

2.  The MLB is back in full swing.  In what has been a crazy and unpredictable start to the year for the American League, the Orioles and Indians are leading their respective divisions.  The Red Sox and Rays are sitting at the bottom of the AL East with 3 total wins between them.   The National League has gone more to plan thus far.  The Reds, Phillies, and Rockies have all looked dominant.  But there is still lots more baseball to be played as the weather is finally starting to heat up.

Here is a look at my key series of the week:

Texas Rangers at New York Yankees:  A rematch of last year’s American League Championship Series.  The Rangers look to have picked up right where they left off and the Yankees have looked very good at times as well.  Texas leads the American League so far in runs scored and has given up the least runs.  So much for Nolan Ryan’s squad lacking pitching.  This should be a great series and could easily be a playoff series come October.

1.  The NBA has finally regained the spotlight in the basketball world.  Now that the College Basketball Madness has finally ended, the pro game is back on center stage.  With the Regular Season ending Wednesday, everyone is anxiously awaiting the playoffs.  It will be very interesting to see how the final seeding shakes out.  But I do know that Chicago and San Antonio will end up with the number 1 seeds in their respective conferences and I do know all 16 playoffs spots have been secured.

I still have LA beating Boston in the Championship.  Playoff Predictions will be coming at the conclusion of the Regular Season though.

Here is the key matchup of the week though.

San Antonio Spurs at Los Angeles Lakers:  These look to be the top 2 seeds in the Western Conference.  San Antonio showed some signs of vulnerability, but has rebounded in a big way down the final stretch here.  This game is in LA though.  With the Lakers probably looking to lock up the 2 seed.  You can count on the typical Kobe Show.  A precursor for things to come in the playoffs.  I will take my chances with the Lakers at home on Tuesday evening.

So there you have a look at the week ahead in sports.  Playoff time is right around the corner for both the NHL and NBA.