“Can You Blame Manny?” 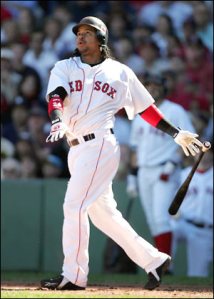 Manny Ramirez (pictured above) in a very familiar pose. A pose that he sported an astounding 555 times during his career. In shocking news, one of the all time great right-handed hitters retired yesterday.

Manny was just being Manny yesterday when he retired from baseball concluding a phenomenal 19 year career.  When I initially heard this news, I was shocked.  I mean why would anyone sign with a new team and retire just a week into the season?  Anybody who claims they were not surprised, either is full of it, or knew some information that had not become public yet.  Even for Manny, this would was a highly unexpected move.  But when has Manny ever done what is expected?

Here is a few quick highlights of some of the numbers that Manny put up, while just being Manny:

-.312 career batting average (find me another power hitter who could consistently hit for average like Ramirez, not an easy task)

And these are only a few of the amazing accomplishments by the right-handed assassin from the plate, Manny Ramirez

But sadly “2” is the big number that will define this man’s career.  2 failed drug tests have marred his image forever.  Sure Manny had interesting incidents happen with the media throughout his career.  I mean how many guys can say that they had the President of the United States (George Bush at the time) call them out for skipping a dinner at the White House? But none of the “Manny being Manny” incidents tarnished his image nearly like the 2 failed drug tests.

And this 2nd one, which came out a little bit after his retirement was announced ended his career.  Can you really blame Manny in this situation?  The guy is nearly 39 years old.  Do you think he really wants to sit out 100 games?

For once I am on Manny’s side.  I do not by any means condone steroid  usage or the abuse of Performance Enhancing Drugs.  But I can respect the man’s decision in this case.

Sadly for Manny, even though he is one of the greatest right-handed hitters of all time, it appears he will never sniff the Hall of Fame.  Just ask Mark McGwire and Rafael Palmeiro how the pursuit of Cooperstown is going.

There are two things you cannot do in the game of baseball no matter how good your numbers are if you want an invitation into baseball immortality.

1.  You can’t gamble on baseball while still a part of the game, especially your own team.

2.  And you cannot use Performance Enhancing Drugs.

I do commend Manny on a phenomenal career where he accomplished so much on the field.  The game will miss his amazing ability at the plate and even some of his playful antics with the media.

Ironically on Manny’s last day as a Major League baseball player, his “real” team, or the team where he defined his career, the Boston Red Sox, picked up their first win of the season against their hated rival, the New York Yankees.

Yesterday’s sudden retirement was one last example of Manny just being Manny.