“Second Time is Not the Charm: Huskies Grind out Bulldogs” 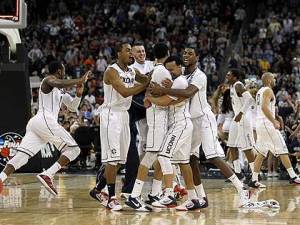 In a wild college basketball season in which there has been no clear cut best team, it has finally come to an end, an ugly end in fact. The Connecticut Huskies won their third National Championship Monday night, grinding it out against the feisty Butler Bulldogs in a low scoring, cold shooting battle. You simply do not expect games like this in the National Championship.

Both teams struggled all night shooting the basketball, with Butler shooting a shocking 12-64 from the field. For those of you counting at home, that is 18%. All tournament long Butler had been shooting well and got timely buckets out of guys like Shelvin Mack and Matt Howard. That was not the case tonight, however.

Butler could never get into a rhythm offensively, missing shot after shot. They never could get going inside the pain, scoring a grand total of just two points from inside there. In the first half alone, Butler shot 22%, got out rebounded by 8, and got out scored 14-0 in the pain, yet somehow led by three points. That had to be promising for Butler, and it could only get better, right?

After back to back Shelvin Mack threes, including one at the buzzer to put the Bulldogs up 22-19, you thought that just maybe, this could be the start of something. Could Butler carry this momentum into the second half? Things started off perfectly in the second half as well. Chase Stigall started things off with a three pointer to put the Bulldogs up six points, but there was no more of that to come. Little did Butler know that they would score just sixteen points the rest of the game. After a Jeremy Lamb three pointer to put Connecticut up 26-25 with 17:49 remaining, the Huskies never looked back. Butler could never make a run, and their bid for a National Title ended.

Connecticut frustrated Butler all night with their length, out rebounding them 51-40, and out blocking them 10-2. Every time Butler tried to go inside they had no luck. Let’s not sit here and act like Connecticut played a perfect game however. But for how this game was played, they did. The Huskies shot just 34% from the field, but their defense was the key. Their defense was very good, but as Jay Bilas pointed out, no defense is good enough to hold a team to 18% shooting. There was also some luck involved.

This was a painful game to watch rooting for Butler, and I cannot even imagine how painful it must have been for the Bulldogs themselves. After coming oh so close a season ago against Duke in the National Championship, Butler made another improbable run this year, and wanted to finish off what they could not do last season. Unfortunately though, it was not a fairy tale ending as Jim Calhoun joins John Wooden, Bob Knight, Adolph Rupp, and Mike Krzyewski with three national titles.

As for Butler, they have so much to be proud of after what they did the last two seasons. The players on the team have bought into Brad Stevens and they play together as a team as good as anybody in the country. It’s a shame they could not win a National Championship either of these seasons, but with Stevens aboard, I get the feeling that this is not the last you will hear of the Butler Bulldogs.

10 responses to ““Second Time is Not the Charm: Huskies Grind out Bulldogs””