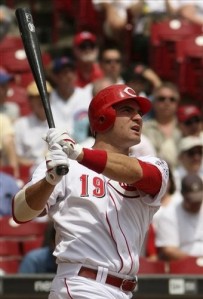 The reigning National League MVP and Red's star 1st Baseman Joey Votto (pictured above) appears determined to lead Cincinnati back to the playoffs. And this time he appears to be playing for keeps.

As I mentioned in yesterday’s “Weekly Nickel,” this is an absolutely wild week in sports.  Here are a few things that have been on my mind over the past 24 hours though.

For all of my Cincinnati people out there, this past weekend was a phenomenal start to the season for the Reds, as they look to repeat as National League Central Champions.  The Cincy boys swept a team that many people are picking to be atop the Central at the end of the year (Brewers).  It is refreshing to watch a team in Cincinnati with high expectations.  I cannot remember the last time this city was this excited about baseball, other than last year’s playoffs of course.

There is one key difference though between this year and last year.  The Reds are no longer the “hunters.”  They are the “hunted.”  And if this weekend was any indication, they appear to be relishing the role so far.  Granted I know only 3 games have been played to date.  159 games left to go.  So maybe I should slow down the excitement meter.  But it is refreshing to watch a team that has the look of a team that expects to be in first place.  A team that expects to make the playoffs.  Over the past decade, the goal was always to try to just go 500.  Win as many as you lose. They never achieved that goal sadly.  But this year’s team appears poised to accomplish the goal of playing deep into the postseason.

After 3 games, Cincinnati has currently scored more runs than any team in the National League (23).  They have a +12 run differential, which is also tops in the NL.  Lastly, they have only allowed 11 runs (tied for 3rd in the NL).  Most questions about this team start and end on whether they have the horses at the top of the rotation.  And we will not know the answer to that question for 5 or 6 months.  But right now, Great American Ballpark is the place to be and life as a Red’s fan is good.

Charles Barkley was an elite player in the NBA.  He was arguably one of the best forwards the game has seen in the past 20 years.  I will never question this guy’s career achievements on the court.  But I will state, he never ceases to amaze me from the commentary booth.

Now watching Charles cover the NCAA Tournament has been somewhat painful over the course of the last 3 weeks.  He just is not familiar enough with the players to provide real in-depth analysis.  Generally he harps on one point over and over for the entire segment.  These points at times are very generic and cliché.  I know the man knows basketball, but he should stick to the NBA.

Anyways, I digressed.  On Sunday, I was enjoying watching an exciting back and forth affair between the red-hot LA Lakers, and the very surprising Denver Nuggets.  At the end of the game, former number 1 overall draft pick Kenyon Martin grabbed a huge rebound off of a missed free throw and converted the put back.  This play was a gamechanger and really ended any hope the Lakers had at extending their win streak to 10 games.  Kenyon unfortunately took away from the play by jabbering at the crowd.  Now I am a huge Kenyon fan.  I always have been since I was a little kid.  But at times, he can lose his composure and act a bit unprofessional.  Well this was one of those times.

Following this Kenyon versus the Laker’s crowd jabber-off, one of the analysts called Kenyon out on this immature act.  Charles then stuck up for Kenyon, and acted like what he did was the right thing to do.  Charles exclaimed that the other analyst did not understand why Kenyon did it and did not understand what it was like to be in the heat of the action of an NBA Game.  And Charles may be right about his peer not understanding what the action of an NBA Game is truly like as a player.  But he does understand sportsmanship.  Charles apparently does not.  Just another Charles moment. I am sure there are still many more to come.

Though March Madness is technically over, the coaching madness is just getting started. College Basketball coaches have been playing their own adult version of Musical Chairs over the past week.  Do not expect the music to end any time soon.  Actually expect the music to pick up with a vengeance now that a National Champion has been crowned.  I never really enjoy this part of the game, in that many schools lose up and coming coaches to the power conference schools.  It is always sad to see these guys leave, but I do understand the reasoning from a business perspective the majority of the time though.