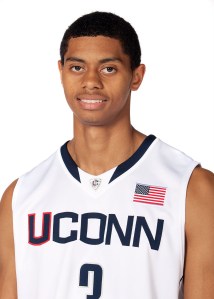 I fully expect a thriller in the West Regional Final matchup between Arizona and Connecticut later today. But the X-Factor, and reason why the Huskies will win is the phenomenal play as of late by UConn super freshman, Jeremy Lamb (pictured above).

So my bracket has finally exploded over the past 2 nights.  I was doing pretty well through the first weekend.  But with 2 of my Final Four teams going down(Wisconsin, Ohio State),  I am now in the same boat as the majority of America.  I guess I can thank the Big Ten for ruining my bracket.  Either way, it has been an unbelievable tournament with phenomenal finishes thus far.  Last night’s late games were 2 of the best games I have seen all year.

I will admit Kentucky shocked me in knocking off my pick to win it, Ohio State, 62 to 60.  Kentucky played a near perfect game and the biggest shocker of all was that their veterans made it happen.  It wasn’t Cal’s young one and dones, but it was the savvy veterans, Liggins, and Harrellson, that made the difference on this night.  Sure Knight (super frosh) hit the big shot, but UK was in the game with a chance to win due to the upperclassmen.  And then the VCU game.  Florida State’s defense is tenacious.  But they gave up a very open look off of the in-bounds in OT to give VCU the win.  One defensive breakdown can cost you your season, and for the Seminoles, it did.  I still do not feel that VCU deserved an invitation.  But boy have they made the most of their opportunity.  You got to be pulling for the Rams to keep dancing on to Houston.

Yet I digress. On to the games today.

Butler vs Florida:  I picked Butler to lose their first round game last year.  I picked them to lose their 2nd round (aka 1st due to format change) game this year.  And I for some reason I am picking against them again.  Florida looks to hold the edge in every way on paper.  Sure Brad Stevens is one of the best coaches in America.  But so is Billy Donovan.  Florida is 4 and 0 all time in Elite Eight games.  They are playing great basketball.  But the Bulldogs are winners of 12 consecutive games.  I just do not see how Butler can possibly matchup with Walker, Boynton, Parsons, Macklin, and Tyus.  It is very hard to believe, but the SEC, arguably the weakest of the big conferences this year, has the most teams left standing as we enter the Elite Eight.  Well they will get at least one into the Final Four.  The Gators handle business and finally end the “ball” for Butler with a massive Gator Chomp.

Arizona vs Connecticut:  It was a common pick for many to have UConn make it to this point.  I was one of those people.  Arizona on the other hand.  Not a common pick to still be standing on Saturday of the 2nd weekend.  Either way, both of these teams are playing phenomenal.  And Arizona put on arguably the best performance of the entire tournament in dismantling the heavily favored Dukies on Thursday night.  The Huskies are 11 and 0 on the year in tournament play.  They boast arguably the best player in all of the land in Kemba Walker, and they really know how to hit the boards.  Arizona on the other hand boasts the guy who is making a real case to be the number 1 pick in the upcoming NBA Draft, Derrick Williams.  They really can get up and down the floor and score.  My gut on this game is that UConn’s Oriakhi can neutralize Zona’s stud Derrick Williams and hold him under 20 while Zona will have no answer for Kemba.  Even if Lamont “Mo Mo” Jones comes to play and  hangs in there with Kemba somehow, which I doubt will happen, Zona will have no answer for UConn freshman phenom, Jeremy Lamb.  Many are anointing this guy a future Big East Player of the Year, and rightfully so.  I realize that Kemba has put the team on his back during this amazing run by the Huskies, but Lamb has been the other key, providing that 2nd big time scorer.  In the tournament, he is scoring 18 points per game, and acting as Robin, for Batman himself, Kemba Walker.  Huskies grind out a thriller that will come down to the final possession.

So there you have my picks.  Make sure to tune in and enjoy the games.  By 10PM, half of the Final Four will be set.  This crazy tourney is heading towards the stretch run.