“Xavier: A Coaching Gold Mine” 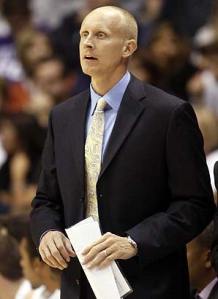 I realize that most Xavier fans are deeply disheartened today by a loss to their 2nd biggest rival Dayton (Cincinnati is the biggest).  Nobody foresaw the number 1 seeded Muskies bailing out in the Quarterfinals of the very weak A-10 Tournament.  I unfortunately was unable to watch the game today due to work commitments.

But from reading and hearing about the game, it sounds like the Muskies played pitiful basketball for well over 2/3rds of the game, yet they did just enough to be in it when the game was on the line.  And was it a foul on Lyons?  The refs called it, so I guess it was.  Is this loss a reason for Muskie Nation to panic?

Xavier knows how to win when it comes time for the “real” tourney.  These Conference tournaments are great and are a piece of all that is March Madness.  But the “real” tournament that makes up the majority of the Madness begins next week.  Xavier is one of two teams in the entire country to make 3 consecutive Sweet 16s (Michigan State is the other).  Xavier has made the tournament 5 straight years (Sunday will mark the 6th), and 9 of the last 10.  They also have won 25 or more games 4 straight years, and likely a 5th after the 1st round of the NCAA Tourney.

Winning in March cannot be taught.  It is something that some teams just know how to do.  And for some reason, Xavier has been one of those teams in recent memory.  Now I will state.  Xavier has developed a program that does things the right way.  Their players stay out of trouble.  They have high graduation rates.  And they win.  What more could you possibly ask for?

I will tell you what.  A consistent figurehead for the program patrolling the sidelines for over a decade.

For those of you who are unfamiliar with XU’s basketball history in the past 25 or so years, it is quite impressive.  Just a tiny Jesuit school (4,000 undergrads) that typically plays second fiddle to the “Major” program in Cincinnati (who are back to being a tourney team again).  I like to refer to Xavier as the “Coaching Gold Mine.” No schools come to mind that have produced as many great head coaches in the past few decades as Xavier has.  Think about the great coaches that have run shop on the  Muskie sidelines.

Pete Gillen, Skip Prosser, Thad Matta, Sean Miller, and now Chris Mack.  Name a better group of 5 coaches that have been at a program in the past 25 years and I will be extremely impressed.  Then try naming a better group of people off the court as well.  I will say you are lying if you think you are able to do this.  Now I will admit, in order to become a “Coaching Gold Mine,” you have to be at a school that is not considered a “destination” school.

Xavier is a very prestigious program that has a fantastic history in recent memory.  But there is no denying that it is what people like to call a “launch pad” school.  The real question is will Chris Mack still be roaming the sidelines in 10 years if he continues to have great success.  Probably not.  It only takes one great man to transform a program into a destination spot though.  Look at Mike Krzyzewski at Duke.  Dean Smith at North Carolina.  Bobby Knight at Indiana.  Now I know this is a bit of exaggeration and those schools are entirely different from Xavier.  But could Chris Mack stay at Xavier and continue to lead them to successful year after successful year for 2 decades?

8 responses to ““Xavier: A Coaching Gold Mine””