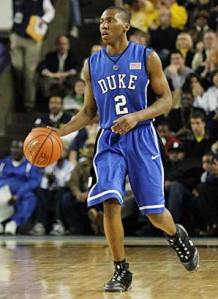 Duke star Nolan Smith (pictured above) will play a major part in the Duke/UNC matchup on Wednesday. Will he be the X-Factor?

Good Monday to you all.  Want to know one of the best things about sports especially in the United States?  They never stop.  We just celebrated the biggest sporting holiday of the year with an outstanding Super Bowl 45.  And guess what, we have another stellar jam-packed week ahead.

Lets jump right into it.

5.  So last night’s Super Bowl was an awesome game that lived up to the hype.  I hope you all enjoyed it as much as I did.  Two great teams putting it all on the line for the good old Lombardi Trophy.  Both teams would have been worthy champions.  But now the subject really turns away from the field to the good old Collective Bargaining Agreement Conversation.  Can Goodell, the owners, and the player’s association come to an agreement?  NFL interest from a national standpoint is at an all time high.  It would be a dire shame if this dilemma could not be worked out in time for next September’s opener.  I think it will get done, even though most facts are pointing towards a strike of some sort.  I have faith in the NFL to take care of business.

4.  I know it is a week premature, but I will tell you what.  I am super excited for the return of the MLB.  Spring training starts next week for all teams (pitchers/catchers report).  After the Giant’s magical run last Fall, could there be another major surprise this year?  I am going with a no at this point.  Though I will put out an MLB Preview before opening day, at this point, it is a 3 team race.

And sadly for the rest of baseball, two of these teams reside in the AL East.  You better believe the title is going through New York or Boston.  These teams were already very talented and only got better.  I want you all to be honest though.  Whether you admit it or not, the majority of you love to watch the Yankees go head to head with the Red Sox in the postseason.  It is the best rivalry in sports.  The 3rd team that will be in contention is the Philadelphia Phillies.  They may have the greatest starting 5 of all time.  Time will tell.

3.  Barry Melrose is drooling over some of the great matchups we have this week.  I will tell you what, when you look at the NHL standings, 14 of the 15 teams in the West are still very much alive to play in the postseason.  In the East, there are probably only 3 teams that have really taken themselves out of contention.  So the parity and competition level is at an all time high.  I mean we have goalies fighting for god’s sake.  People really need to catch the NHL fever especially now that the NFL Season is over, and who knows if it will even pick up again come September.

There is one matchup in particular that I am keeping a keen eye on this week.  The matchup occurs in Canada, as the Ducks fly north to take on the Canucks.  The Canucks are the hottest team in the League and currently sport the NHL’s top record.  Anaheim on the other hand finds themselves in the lower middle tier of the Western Conference playoff picture.  Can you say possible first round playoff matchup?  Either way, I fully expect the red-hot Canucks to continue their dominance and to defend their home turf come Wednesday night.  Vancouver is 18-3-5 at home this year.  Anaheim on the other hand has struggled on the road and is below 500 away from their home turf.

2.  Recently I have had some complaints from some of my loyal followers of “TheSportsKraze” that rather than giving a synopsis of the marquee matchups of each night in the NBA, they would like me to just choose a game and give a prediction.  Well to my loyal fans out there, today is your lucky day.  Because that is just what I am going to do.  I will state though, due to the fact that the NBA has great games every night, it is very tough to choose just one to talk about.  With that being said, the premiere matchup of the week in the NBA occurs on Thursday in Beantown.

A rematch of last year’s NBA Finals.  Lakers vs Celtics.  The best rivalry in professional basketball.  Everyone has an opinion on these two storied franchises.  As of late, many have questioned the Laker’s toughness.  People feel this team is over the hill.  And without some sort of major trade or acquisition, LA’s chances of 3-peating are finished.  Well as I said a couple of weeks ago when the Celtics shelled the Lakers in LA, not so fast my friends.

The Lakers are the Yankees of the NBA.  Every year, they suffer a midseason funk and people question their toughness and wonder if they can get the job done come playoff time, or in some cases for the Yankees, even make the playoffs.  LA is currently in 3rd overall in the West (just a half game back of the 2nd place Mavericks).  This past Thursday, they had a golden opportunity to knock off the team that sports the best record in the NBA and unfortunately were unable to capitalize.  Sadly for Boston, this just wet the Laker’s hunger.  You better belive that you are going to see a different Laker’s team in Boston come Thursday, than you saw a couple of weeks ago at the Staples Center.  Kobe is the best player in the League at dealing with adversity.  People are calling out LA’s manhood.  Expect a definite response at the Garden on Thursday.

1.  Dick Vitale has already tweeted about it on at least 3 different occasions.  And that is a lot for Dickie V to tweet about anything.  This event does not even occur until Wednesday.  Any of you that know Dick Vitale probably already know that this has to do with an event pertaining to the ACC.  And a certain ACC team.  It’s the Dukies baby!  Arguably the best rivalry in College Basketball takes center stage on Wednesday night as UNC strays a few miles away from their Chapel Hill sanctuary to take on their bitter rival.  Duke vs UNC.  And luckily for the rest of America, UNC has finally decided to start playing like the Tar Heels of yester year.

UNC is currently riding a 5 game win streak.  Last game, they absolutely pulverized a Florida State team that if you do not remember, knocked off Duke earlier this year.  UNC is one of those teams that can score with the best of them, and a distinguishing feature of this team is their ability to hit the boards hard.  UNC currently ranks 2nd in the country in rebounds per game at just over 42.  In a wide open ACC, UNC has a good of a shot as anyone to bring home the conference crown.  Beating Duke would go a long way in making a case for Roy Williams, and his extremely young Tar Heel squad.

And then you got the Blue Devils.  Duke up until the middle of January was the number 1 ranked team in the land.  Even without their stud freshman Kyrie Irving, they seemed to be rolling.  Sadly for Duke, opponents have begun to find the chink in the Blue Devil armor.  Get physical with Coach K’s team, and pray that they are not hitting from the perimeter.  Unfortunately for most Duke opponents, the latter does not happen often.  The Blue Devils shoot nearly 40 percent from 3 point range and launch up over 22 attempts a game.

The X-factor in this game will be the experience of Duke stars Nolan Smith and Kyle Singler.  UNC is an extremely talented team that will be a dangerous matchup for anyone in the early rounds of March Madness, but Duke’s experience will prove too much in this one.  Not to mention the Blue Devils do not lose at home.  The call is Duke winning an exciting game against their bitter rival.

So there you have it.  It should be another awesome week of sports, especially for the basketball lovers out there.

One response to ““Weekly Nickel””