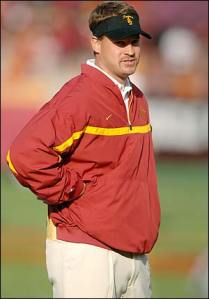 I fully expect USC Head Coach, Lane Kiffin (pictured above), to be running his mouth in a big way if his team can pull off the upset at Arizona this weekend.

We find ourselves already in the 11th week of the College Football season.  The games have added meaning now.  Conference titles are beginning to take shape.  The BCS picture is started to become a little less foggy (no way it could be as foggy as that Miami (OH) vs BGSU game last night).  But the one thing I will state.

College Football Week 11 is like Seven-Eleven.  It is always open.

Here is a look at some of the marquee matchups this weekend.

Kansas State at Missouri:  This is a colossal matchup in the Big 12.  Both of these teams have lost control of their destiny in making the Big 12 title game.  They will need to continue to win and receive a little help from others, but they do have a shot at making a big time non BCS Bowl game.  KState has struggled throwing the ball all year, but they do run the ball with ease.  The running game, led by senior Daniel Thomas has been a main reason why this team has had any success this year.  Missouri, on the other hand, has a very strong passing attack, and a phenomenal defense.  This was a team that was undefeated 3 weeks ago and had just knocked off the number 1 ranked Oklahoma Sooners.  Now they have lost 2 straight, and are looking to make a statement.  Expect a big day for Blaine Gabbert as Missouri finally gets back on track.  Tigers win by 10 at home.

Mississippi State at Alabama:  Both of these teams are very dangerous to any opponents.  Alabama still arguably has the most talented team in the country, even with 2 losses.  Mississippi State is riding a 6 game win streak and is looking to show the world that their win over Florida was no fluke.  Sadly for the Bulldogs, they are facing a Nick Saban Bama team that will be coming out with a vengeance in front of the home crowd.  Both of these teams run the ball with ease and really play lock down defense.  The only difference is, Bama has big play wide receives like Julio Jones and Marquis Maze that can change the game with one play at any time.  Look for the Tide to Roll to a 14 point victory at home.

South Carolina at Florida:  These two SEC powerhouses have been extremely unpredictable all season long and it will be interesting to see who comes to play this weekend.  Whichever team plays for keeps will be heading to the SEC Title Game.  Will Steve Spurrier be able to Gator Chomp his former team in the Swamp? In order for Spurrier and the Gamecocks to have a chance to celebrate, they will have to get a huge performance from freshman Marcus Lattimore.  Sadly for the Gamecocks, the Gators finally seem to be finding rhythm both offensively and defensively and you know that they are used to big game atmospheres.  If this game was in South Carolina, I would be picking the Gamecocks.  But it is in the Swamp.  Gators by 3 at home.

USC at Arizona:  This will be a big time matchup in the PAC 10 as old power takes on new power in the desert.  For some reason, I have lost confidence in this Wildcats squad.  Their performance last week against Andrew Luck and the Stanford Cardinal was abysmal.  They looked to be feeling the pressure of being in a meaningful game in front of a national audience.  Well this week, ABC is featuring this nighttime duel.  Expect USC to come out loose and ready to go.  I mean, they do not get to participate in the postseason this year.  So what could be better than spoiling Arizona’s season in front of the entire country?  Expect USC to take care of business and win this one by 6 on the road.  Lane Kiffin will surely be running his mouth after this one.

So there you have it.  Week 11 appears to be wide open with some stellar matchups.  Expect some great battles and down to the wire finishes following last weekend’s massacre filled Saturday.