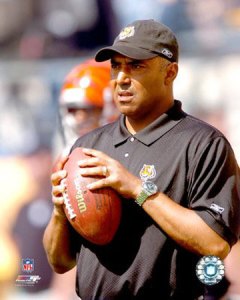 The saying goes, "Perception is a reality." Well Bengal's Head Coach, Marvin Lewis (pictured above), is in desperate need of a big time Monday Night Football win against the rival Steelers.

The 3rd edition of the Weekly Nickel is here.  And boy do we have another exciting week ahead of us in the sporting stratosphere.  All the major sports are overlapping at this point, and you got to love it.  Next week at this time, the baseball season will be in the books.

5.  The NBA is already a few games in.  The Heat could possibly be forreal after giving an execution to the Magic this weekend.  But my best matchup of the week takes place tonight.  My two sleeper teams match up in what should be a great game between two of the League’s top young teams.  Portland heads to the windy city to take on a very talented Chicago Bulls team.  Who you got?

4.  The NFL flys into Week 9.  Hard to believe this season is already halfway finished.  The Chiefs continue to shock the entire league as they remain in first place in the AFC West.  Also do not forget about Dallas and San Francisco dwindling in the cellars of their divisions.  The NFL is the most parity filled professional sport we have.

3.  The 10th week of NCAA Football.  The BCS picture is starting to become a bit clearer (if that is possible).  And there are some major matchups this weekend.  Two top five opponents, TCU and Utah are set to rumble.  A major SEC duel between Alabama and LSU, possibly the two best 1 loss teams in the country.  Plus there are a couple of other matchups between ranked foes.  Saturday will be a Gameday to remember.

2.  Could San Francisco be bringing home a World Series?  This franchise has not won a world title since 1954.  And that was a Willie Mays led Giant’s team that played in New York.  Could history be made this week in the bay area?

1.  Fine I am a homer.  But the biggest sporting event coming up this week is the Bengals Monday Night Football Showdown with the rival Pittsburgh Steelers.  For most of America, this is just your typical Monday Night matchup, but for Cincinnati, this is a game that could make or break the season.  Sure the Who Deys have been highly disappointing and sit at just 2 and 5, but a win against the Steelers in front of a huge national audience could help save the season in a way.  It could also help save the job of Head Coach, Marvin Lewis.

So there you have the 3rd edition of the Weekly Nickel.  Let me hear your thoughts.  Do you agree with my top 5?