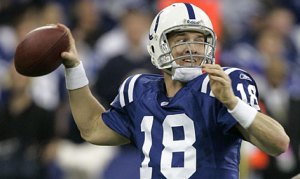 Look for Peyton Manning (pictured above), to lead the Colts to a major victory on Monday Night Football.

The NFL scampers on to the near halfway point.  So far this year has been crazy, and expect it to get “scary” this weekend on Halloween.  The Cowboys are in dire trouble.  The Vikings are vastly underachieving and marred by Brett Favre issues.  Both teams out of New York are in first place and showing a true “Empire State of Mind.”  Neither of last year’s Super Bowl participants, the Colts nor Saints, are in first place in their divisions. And the injuries are mounting.

In the pick’em challenge, the scoreboard reads as follows:

Dolphins at Bengals:  I cannot pick against the Who Deys at home.  They showed glimmers of life in the 3rd quarter last week.  I cannot see this talented group falling to 2 and 5 against a mediocre Miami team.  Bengals by 3 at home.

Jaguars at Cowboys:  America’s team looks to be a “one man team.”  Outside of Dez Bryant, this team has looked awful.  But for some reason, I am picking them to be able to slow down the Jaguars one-dimensional offense and regain some dignity at home.  Cowboys by 3.

Redskins at Lions:  I will admit that the Skins have thoroughly surprised me this season.  They have played close games pretty much every week, and gutted out 4 wins.  The Lions have lost many close games this year.  Sadly for Detroit, they are going to lose another close one at home by 1 this week.

Bills at Chiefs:  The Bills are the worst team at defending against the run in the NFL and the Chiefs are the best rushing team in the League.  Jamaal Charles and Thomas Jones will power the KC boys at home by 10.

Panthers at Rams:  The Panthers gutted one out last week while the Rams lost a heartbreaker.  Look for a reversal of roles this week.  Expect Sam Bradford to put up numbers, as the Rams scrap out a nail biter at home by 3.

Packers at Jets:  My preseason Super Bowl pick right here.  Sadly, injuries have really hurt the Cheeseheads.  Still both teams are definite title contenders.  But look for the Jets overall balance both offensively and defensively to prove too much at home.  Jets by 1 in a wild one.

Broncos at 49ers:  The 49ers are arguably the NFL’s most disappointing team thus far.  The Broncos have also been underachievers.  Look for the 49ers to ride Frank Gore to a victory in front of Big Ben (London) by 6.

Titans at Chargers:    The Chargers have the number 1 ranked offense and number 1 ranked defense in the League! Yet they are 2 and 5. The Titans have been riding Chris Johnson and Kenny Britt offensively to a very strong start.  Look for the Chargers numbers to finally translate into wins.  SD by 3 at home.

Buccaneers at Cardinals:  The Buccaneers feel they are the best team in the NFC.  I am not so sure about that.  Look for the Cardinals to somehow grind out a victory by 7 at home over the supposed “NFC’s Best Team.”

Vikings at Patriots:  Will Brett Favre start?  Who cares!  No matter who the Vikings put under center, the Patriots will prove to be too much.  Moss will be regretting his departure as his “new” team gets spanked by his “old” team.  Pats by 10 at home.

Seahawks at Raiders:  Was that Raider’s performance legitimate last week?  The Raiders are great at pounding the ball on the ground while the Seahawks have been masterful at stopping the run.  Look for Seattle to “Rain” on the Raider’s parade with a 3 point road victory.

Steelers at Saints:  It is no longer last season.  The Saints are struggling offensively.  They hit new lows with a home loss to the lowly Browns last week.  Well things will continue to get worse as the Steeler’s D roughs Drew Brees up in front of a national television audience.  Steelers steal one on the road by 6.

Texans at Colts:  What a matchup this will be.  Definitely the week’s most exciting game.  Two great offenses putting on a show on Monday Night Football.  Do not expect Peyton Manning to lose two times to a divisional opponent.  It just doesn’t happen.  Colts by 3 at home.

Jags over Boys by 10

Skins over Lions by 6

Chiefs over Bills by 14

Rams over Panthers by 7

Jets over Packers by 8

Chargers over Titans by 3

Raiders over Seahawks by 7

Pats over Vikings by 9

Bucs over Cards by 6

Steelers over Saints by 7

Colts over Texans by 3

Bengals over Phins by 1

Almost halfway through the season with no undefeated teams. There is something to play for every single week. Look for some mid-level teams to try and make a push for the second half of the season this week.

Expect some spooky NFL action this Sunday.  Many teams will be trick or treating while others will be crying.  The wild NFL continues Sunday.