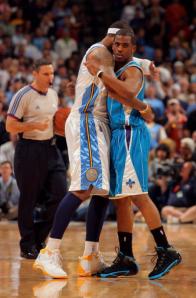 Could these two bitter rivals on the court and good friends off the court land in New York City next season?

Just when we thought the aftershock of “The Decision” was over. Today started murmurs about the possible departures of Chris Paul and Carmelo Anthony from their current teams, to the Big Apple. New York would truly be the city that never slept if this happened. The Knicks have been craving a winner for the better part of a decade. A once proud franchise has really been at a standstill or a steady tread downward for 10 plus years now. Well that could all end in the very near future if the General Manager for the New York Knickerbockers (Donnie Walsh) puts on a David Blaine act. And a guy can dream right? I mean how far-fetched did most think it would be to see Lebron James and Chris Bosh join Wade in Miami?

In the words of the famous Disney Movie, “Angel’s In the Outfield,” “It could happen.”  So without even looking at the actual logistics and possibility of this momentous move, today, lets just dream big and look into if this actually happened. First of all the effect it would have would be amazing. Because these 3 players actually would have the pieces to gel. They are not just 3 random superstars. You take the best point guard in the game in CP3. Put him with the best small forward in the game outside of “King” James, Carmelo Anthony, and add in the highlight reel that is power forward Amare Stoudemire? You better believe that you have a great mix of guys that could really play together.

Amare was acquired by New York to bring other big names with him.  Stoudemire failed in a big way in July at helping acquire big name talent with him.  Well July is over and it is August now. Carmelo is an East Coast guy who thrived at Syracuse. And CP3 wants to play on a winner and even hinted at this trifecta heading to NYC at Melo’s wedding. The consequences for the East would be mind-blowing. The old Knicks vs Heat rivalry would be renewed. And probably more exciting than ever.

This would probably even lead to the power shifting in the NBA from the West to the East. In the East, you would now have the Celtics, the Magic, the Knicks, and the Heat as 4 very strong teams.  Not to mention a 5th very solid team in Chicago. The West would be left with the Lakers, the Mavericks, and the very young Oklahoma City Thunder. The Nuggets would never be the same without Melo. The Hornets were not a contender anyways. The Jazz loss of Boozer hurts.  The Trailblazers are always a major question mark due to injuries. The Spurs are becoming old and decrepit. This move would honestly lead to many believing in the East as the superior conference for the first time since the days of his “Airness.”

And I will say this. On paper, Lebron, Wade, and Bosh are the more skilled trio according to most.  Not to mention that Pat Riley is surrounding them with a decent supporting cast considering his lack of funds. But I will state that the New York trio would have a far better chemistry and would have a better shot at bringing home the title in my eyes.

The NBA game has had a reawakening at the point guard position.  Look at the contending teams from last year.  The  Celtics, the Magic, the Lakers, the Nuggets, the Mavericks, and the Suns and I could go on.  Want to know what they all had in common?  A big time point guard with playoff experience.  I mean think about it.  These teams had Rajon Rondo, Jameer Nelson, Derek Fisher, Chauncey Billups, Jason Kidd, and Steve Nash.  Do the Miami Heat have a real legitimate point guard next year?  I guess Wade could do it.  But I would rather have Chris Paul running my offense.

So could this second terrific trio be formed, and would it be the “Real Terrific Trifecta?”

Most are probably very confused by the title of this post.  Two random dates in December over 42 years apart.  How could these dates possibly be related by any means?  Maybe it has to do with the NFL or NCAA Football since … Continue reading →