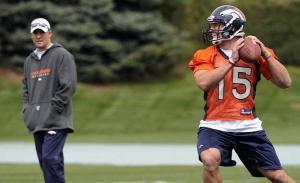 Denver Broncos 3rd string quarterback Tim Tebow, is getting the attention of a 1st stringer. Could the former Zeus like figure from Florida start in this League?

You really think Gatorade was the biggest thing to come out of Florida in the past 50 years?  You have got to be kidding.  You must be forgetting about the man, the myth, the legend.  King of the Swamp.  King of College Football.  A man of a Godlike stature.  The Chosen One from Florida.  Urban Meyer’s “Real Son.”  The real “Most Interesting Man” in the world.

Tebow Mania is back.  And does not appear to be going anywhere anytime soon.  Last evening Tebow made his first professional appearance against the Cincinnati Bengals in a preseason contest.  He put on a mediocre performance at best, going 8 of 13 for 105 yards, plus one rushing touchdown the last play of the game.  I will state this.  I have never heard of a 3rd string quarterback getting more recognition and accolades in my entire life.  The guy is the 3rd string QB on a team that failed to make the postseason last year.  Yet he has the highest selling jersey in the League.  Headlines about him have been dominating ESPN more than any other NFL players except Darrelle Revis, Brett Favre, and Albert Haynesworth (who are all proven stars I might add).

It just is absolutely astonishing me.  Tebow could go without taking a snap the entire year in a real game.  And you better believe he would get more media attention than 90% of the players in the League.  I remember a few months ago when everyone was utterly shocked he got drafted in the 1st round.  The man who they called the “Greatest College Player” of all time was a 1st round shocker.  There were question marks galore on if he had the tools to be an NFL quarterback.  And I hate to say it, none of those question marks have subsided.

But I digress.  The NFL better brace itself for Tebow Mania.  Because Tim is on board.  And after last night, people are already calling for a Tebow promotion from 3rd to 2nd string.

Can you handle more worshipping of this guy?  Even if he is just a 2nd or 3rd quarterback?