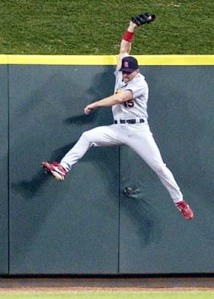 The Reds picked up one of the greatest fielding outfielders of all time this afternoon. Can the Reds utilize the experience of the seasoned veteran Jim Edmonds to help lead them to an NL Central Title and the team's first postseason appearance in 15 years?

The Reds have answered all  the questions of fans and critics alike about making a pickup for the stretch run.  Earlier this afternoon, the Reds acquired 16 year veteran outfielder, Jim Edmonds, in exchange for the young and talented Chris Dickerson.  And I have to admit, I love this pickup.  So Chris Dickerson has great upside. Fortunately for the Reds, so does Jay Bruce, Drew Stubbs, and Chris Heisey.  The Reds are in the hunt this year.  And have just officially shown that they are in what I like to call “Win now, worry about next year later mode.”  The  Bengals proved this by acquiring Terrell Owens.  Now the Reds are in the same boat with the pickup of Edmonds.  For once, Jim will not hurt the Reds down the stretch.  He will be on our side this time.

Now I know many people are probably thinking, “Why now, we really like the team we have?”  Walt Jocketty, the Red’s General Manager, is constantly making moves.  He is one of the best GMs in the game and operates through a very hands on style.  He has that desire to win that this organization has been missing for some time now.  Edmonds was one of his guys in St. Louis.  As was Scott Rolen and Russ Springer.  He believes in these guys to win.  And so should the Cincinnati fans.  Now I realize Edmonds is far past his prime.  He is 40 years old now and has not been healthy during the course of a full season for over 5 years.  But I have one number of importance to say to you. 7…

Jim Edmonds has been to the playoffs 7 times during his career.  That is 7 times more than a good portion of the entire Red’s roster.  And not only has the guy been to the postseason, but he has produced some solid numbers.  Hitting .274 with 13 HRs and 42 RBIs in his illustrious playoff career.  And putting on a defensive exhibition, as he always does.  This is what the Reds need right now as they head into the biggest series of the year.  They need another proven winner and leader in the clubhouse.

Now do not count on Jim to put up big numbers.  Those days are over.  But count on him to play smart baseball and help guide the Reds toward the playoffs with his professionalism, leadership skills, and overall baseball IQ.  And the beautiful thing for the Reds, Edmonds is 40.  This is no long-term committment if he tanks.  He does not have a big time salary that we have to pick up.  And the boys have been doing just fine without Dickerson, who we lose in this deal, since the end of April.

So this is a win for win for the Reds.  And don’t kid yourself, the Cincinnati sporting realm is in a “Win now, worry about next year later mode.”

Why not this year?