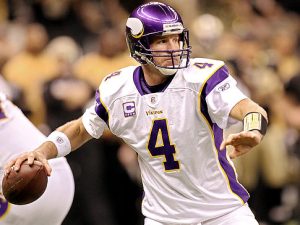 Will fans ever see the legendary Brett Favre throw another pass in the NFL?

Alright I had to do it.  As much as I am tired of hearing about this seemingly never-ending story on the ageless wonder who continues to make sure the media is entirely focused on him, it is the hottest topic going on in the sporting world.  Today has been a relatively slow day in the wide world of sports, and this is the “it” story of the day.  People love and hate to hear about number 4 all in one (many would say mostly hate).  There is no way to really explain the media phenomenon that is “The Brett Favre Saga.”  The best word I can think of to explain it is “enigma.”  This whole tale especially over the past few years has baffled the my mind, along with the entire sporting stratosphere.  There is no logic to it, but Favre is apparently retiring for a 3rd time according to many sources including the one and only Adam Schefter.  Could the 3rd time be a charm for this colossal figure?

This saga continues to add to it’s already overly mysterious nature.  In Brett’s 2 previous retirements, most thought that he would not return.  This time, nobody saw the retirement coming.  Most people had been predicting the Vikings to be at the top of the NFC because they were “sure” that Brett Favre would return.  And I will admit, I was included in that bunch.  Brett might have had the best all around performance of his illustrious career last season.  He has a great team around him in Minnesota, which features a tenacious defense, and a plethora of weapons on the offensive side of the ball.

So why now?  Why does he keep the world guessing?  In my eyes, Brett continues to do his best to demonstrate his masculinity and stature.  He is bigger than the game.  And he wants to make sure everyone knows it.  Sure the guy loves to play, but who needs to retire 2 times and return each time?  This guy over the past 3 years has completely destroyed the expression, “Perception is a reality.”  What people perceive about this guy, has never been and never will be the reality.  People a few years back perceived he was washed up and done.  He came back and had a solid year for the Jets.  Following his year-long vacation in New York, people once again perceived the guy as too old to come back.  Well wouldn’t you know it.  The man took your perception, made sure it was not a reality, and returned to the League.  In his year-long stay in Minnesota, the guy had a phenomenal all around year and surprised many including myself with his outstanding performance.  So following a heartbreaking loss to the Saints in the NFC Championship Game, people perceived that this guy still had it and would be back for another run at the ring.  Well our perceptions were not Brett’s reality.

I will say this though.  This could all just be a case of the little boy who cried wolf.  And Brett could secretly be planning on coming back.  I will not believe Favre is officially retired until Minnesota heads to the Superdome to take on the Saints in a Thursday night showdown on September 9th.  If Brett is not suited up on the sideline I will believe in his “retirement.”  Can Brett restrain himself from this most momentous of stages though?  Especially when he was so close last year?  We will find out.  People do not know what to perceive in this case now.

Will Brett stay or go?  Nobody knows.