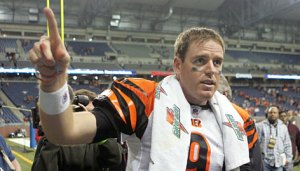 Carson Palmer is getting the unique opportunity this year to rejoin the NFL's Elite Quarterbacks with the addition of Terrell Owens. Count on number 9 to make the most of this opportunity.

Terrell Owens will be a Cincinnati Bengal this upcoming season!  As a Cincinnati fan, you have got to love it.  There is an air of confidence flowing through Cincinnati as the boys head to Georgetown for training camp, and rightfully so.  We just brought in a future Hall of Fame receiver to compliment another possible future Hall of Famer in Chad Ochocinco.  I talked in my post on Saturday entitled, “TO Fo Sho” how the Bengals had nothing to lose in going for the superstar wide receiver.  Boy am I happy now that we actually have him.

So most sports talk of the last 24 hours has revolved around discussions of the lethal tandem Chad and Terrell will be.  There has been talks of how the best buddies call themselves Batman and Robin.  How they think next years’ games should be put on Pay Per View because people should have to pay to watch a combo like this.  There have been comparisons to what the Miami Heat recently did in the NBA in uniting the 3 superstars.  Well these 2 should make a lethal combo.  And this officially makes this without a doubt, the deepest and most talented team of the Marvin Lewis era.  Honestly, this team was already probably the best Marvin Lewis had ever had in Cincy even before the TO signing.

But the real story in my eyes.  Get ready for the Carson Palmer show.  Can this once can’t miss prospect regain his status among the elite quarterbacks in this League?  Can he prove to himself, his teammates, and the city, that he is capable of playing at an All Pro level again?  For those of you who are loyal followers of the Bengals have to somewhat remember what the Carson Palmer of 05 looked like.  This guy was on his way to being one of the top few quarterbacks in the League.  Since a horrible knee injury in a playoff game versus the Steelers that year, it has been pretty much all down hill.  Well now Cincinnati and Carson Palmer get a second chance.

The former USC Trojan standout is healthy.  He is determined.  And he has an outstanding supporting cast.  I also love how Chad Ochocinco has been taking all the credit for getting TO to come to Cincy.  Chad has been saying how this was all a preview of his great General Managing abilities.  But the truth of the matter is Palmer was also key in getting Owens to come.  Yes Chad did a great job on selling his good buddy, but Mike Brown and Marvin Lewis took the opinion of Palmer much more seriously than Chad’s in that there was no bias.  Carson just wants to win ball games and said that Terrell could help take this team to the next level.

Well not only can Terrell help take this team to the next level, he can help take Carson to the next level. He can help take Carson Palmer to that elite quarterback status level.  For those of you who do not remember, Carson had an over 100 passing rating during the Bengals 2005 AFC North Division Championship year.  Since then, his numbers have went down a little bit each year until this past season, where he made a little progress.  But still most people continue to criticize Carson and give him no credit for the success of the Bengals.  The Bengals had become an old school smash mouth football team.  They lived and died on their rushing attack and defense last year.  And that is fine.

Get ready for a return to the glamour and glitz of 2005.  Sure this team will still utilize the rushing attack and a strong defense, but they will also be able to play a high-octane aerial style of offense as well.  This team compared to the 2005 version of the Bengals is much more mature and experienced than that team.  They also will not be surprising anybody.  People should be ready to watch the Bengals put up a top 5 finish in overall offense this season.  The Bengals will have that rare mix in today’s League of being able to both run and pass the ball effectively. With Palmer at quarterback, Benson at running back, Chad, Terrell, and Antonio at receivers, and a rookie with a world of potential in Jermaine Gresham at tight end, be forewarned.  This team will excite.  Grab your popcorn.

So please do not make this all about Terrell Owens and Chad.  Sure Carson is fine with all the media attention being placed squarely on Ochocinco and TO.  They have both always been media hounds.  Palmer will let his right arm do the talking.

The real storyline of this year in my eyes should be about the return of the Carson Palmer Show.  This is his big second chance to join the NFL’s Elite Quarterbacks.  Not too many guys get blessed with a second chance like this.