While in attendance at Great American Ballpark this weekend, I heard many murmurs from fans calling for Bruce to be sat or sent down to the Minor Leagues.  Today, even the Enquirer has an article out entitled, “Jay Bruce not so … Continue reading →

Yesterday, Yankee ace Andy Pettite, suffered a grade 1 strain to his groin.  Apparently this was very painful for the Yankee ace and something that he could not pitch through.  Pettite is expected to remain on the disabled list for … Continue reading →

Today, the limelight was finally taken off of Lebron James in Miami.  The real “King” of Miami, has been heard today in a big way.  The real Slim Shady has stood up.  Quotes from Heat superstar Dwyane Wade have been heard loud and clear today.  And I will admit, I was very surprised to hear Mr. Wade, a man who has been very smooth with the media for his entire career, make the outrageous remarks that he made.

In summary, he compared a 3 game losing streak next year for the Heat to the World Trade Center Towers coming down.  This is absolutely unacceptable no matter what the context.  Find another metaphor or comparison.  It is never a good idea to bring up possibly the worst disaster in American history.  This is a subject that should never be compared to a losing streak in a sporting event.  Sports were used as a coping mechanism in 2001 to help mend the wounds suffered by millions.  It was never used as a comparison.

One thing that this did prove though.  No matter how big guys like Lebron James and now Dwyane Wade think they are, they cannot do whatever they want.  Wade made an outlandish statement and got called out on it as he should have.  Just because these guys are megastars does not mean they can do and say whatever they please.  There are restrictions, even if you think that you are bigger than the game.

I am still utterly shocked that Wade said something this dumb for lack of a better word.  The Heat have had a fantastic offseason.  But through the antics of Lebron’s “Decision” and now Wade’s big mouth, people will be rooting for these guys to fail.  This could be a good or bad thing for the Heat.  Wade did also say 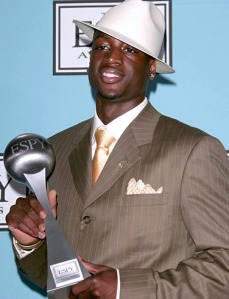 Dwyane Wade looks very smooth here pictured at the ESPYs. Boy was he not smooth with the media today.

today that he always loves to have a fuel.  Every athlete needs a fuel to accomplish big things according to Dwyane.  And fans thinking that the Heat can’t win the title or pulling for the Heat not to win will act as a fuel for him and his teammates.

Wade was also quoted today as saying, “”We’re not even the champions but we’re going to get that kind of attention from teams,” Wade said. “It’s a respect factor” (ESPN).

Well I hate to say it Dwyane, Miami may be Wadeville, but where is your respect?