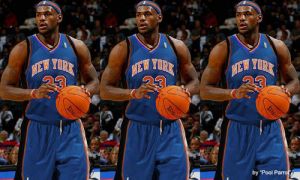 Though Lebron is switching to number 6 next year, he could be sporting a Knick's jersey and calling Madison Square Garden his home.

I know that I have complained about entirely too much media attention being given to the ridiculous spectacle that is “The Decision.”  I have accepted that the “King” is bigger than the game itself.  It is hands down the hottest story going on in sports.  So I am going to give my final thoughts before the big television special tonight at 9:00.

Through all of this insanity, I think Lebron is going to end up where people 2 years ago started speculating he may end up.  Yes sir, I think he is heading to the Big Apple.  People will be going to Madison Square Garden to see the New York Knicks featuring the Lebron James Show.  Now I could obviously be wrong, but who hasn’t been during this insane journey.  All of the experts that we know and love have changed their opinions at least a handful of times that we know of.  Nobody has stuck with the same team in the Lebron sweepstakes whether they claim to have or not.

And if tonight at 9:05 somebody says, “I knew he was going there along.”  They will be lying through their teeth.  Nobody except Lebron has known all along (and he may not have for that matter).

At 9:00, if “The Decision” goes as I expect it to, we may be witnessing the end of Cleveland as we know it.  I am a Ohioan, and my condolences go out to the Northeast part of the state.  Just call Cleveland heartbreak city.  Because if Lebron decides to leave, the city will be in mourning for a long time.  Not only from an athletic standpoint, but their economy will suffer as well, which opens up whole other bag of worms.  There doesn’t look to be too much light at the end of the tunnel.  The Indians are down.  The Browns, though they did defeat the Steelers last year, do not look to be turning into a contender anytime soon.  The Cavs were the city’s chance to get a title.  And unfortunately, in typical Cleveland fashion, their hopes and dreams were squashed the past 2 years.  The wait will continue (if Lebron leaves)..

Many experts are saying that Lebron is headed for Miami.  Boy would this be a mistake on so many different levels in my eyes (I will not go into this now though).  They are saying that  it is a done deal.  Just like Cleveland was a “done deal” a week ago.  Just like Chicago was a “done deal” a few days ago.  This whole frenzy has reminded me of  the television show “Gossip Girl.”  And though I have never had the pleasure of seeing this television show, what has gone on this July must be something similar.  It has been a he said, she said fiasco.  I have felt like a young school girl during this entire process, constantly in the unknown.

Well I am saying he goes to New York.  Lebron will be able to wear that Yankee hat he loves with pride as he roams the streets of the greatest city in the world.  The city that never sleeps.

Though tonight, it looks like Cleveland probably will not sleep sadly.

“LBJ is King, but Life Goes On” 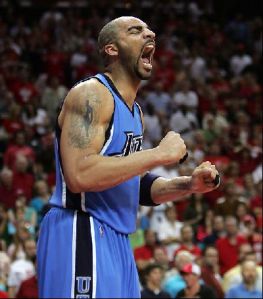 Carlos Boozer should be yelling for joy after signing a big time contract with the Chicago Bulls yesterday.

Either way, Boozer is now on a team that will be a playoff team, and he just took in a boat load of money.  And wouldn’t it be ironic if Lebron was reunited with his former Cavs teammate Boozer in Chicago?  Maybe LBJ missed playing with the scrappy Boozer.  Many thought that Carlos was a great college player who never would have the skill set to compete at the next level.  Boy were the experts wrong.

This guy has averaged a double/double the past 4 years and is a career 17 and 10 guy.  That does not appear to be a guy who is unable to compete.  For Chicago, especially if they come up empty-handed on the King, they really salvaged their offseason with this pickup.  They may not be a title contender yet, but the have improved.

Staying in the NBA, the League announced the salary cap to be at 58 million for next season, which is about 2 million more than expected.  So teams will have a little more money than they originally bargained for to spend.  Could this be a sign that the recession is ending (just kidding)?  Also in the NBA, Kevin Durant, last year’s League scoring champ, who has remained very quite during this entire free agency frenzy, signed a 5 year contract extension with the Thunder for around 86 million.  Durant and the Thunder appear to be on the brink of becoming a contender.  Get this team a center or a very tough power forward, and they will compete for the West.  Maybe they should have went after Mr. Boozer perhaps?  Though this may have not fully solved their problem of lacking a solid center, it would have been a makeshift start.

In other sporting news, the World Cup had its second semifinal match yesterday.  Very weird how Lebron James and “The Decision” have completely overshadowed this event.  And in similar fashion to the Eurocup final of 2 years ago, Spain once again defeated the mighty Germans 1 to 0.  After Germany had massacred the “it” team of the tournament (Argentina), many had jumped on the German bandwagon (myself included).  Well I and many others were wrong again.  The Germans appeared half asleep the entire game and were outplayed by the very young and talented Spanish squad.

Now Spain will get to participate in their first World Cup Final against the Dutch.  Neither of these storied soccer countries have ever won a World Cup title.  So on Sunday, we will have a new champion.  Now I know many are disappointed not to see Brazil, Argentina, or Germany in the finals, but these are both great teams that have earned their spots.  Many are not excited for this Final but I think that is nonsense.  These are 2 very strong teams that will put up an entertaining final.  So do not forget to tune in on Sunday at 2:30.

Lastly, voting for the final spot on the NL and AL All Star squads ends tonight with the announcement being made at 6:00.  Now I know this is only a precursor to the real announcement show at 9:00, where Lebron will reveal to the world where he will be playing basketball next season.

Do not get to glued to your television set.