“Bring on the Heat” 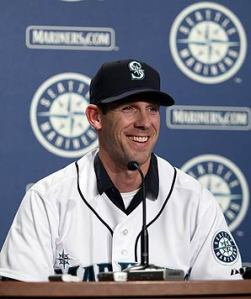 Cliff Lee at the podium after being signed by the Mariners. Could he possibly be sporting a new team like the Reds come the end of July?

It is July, and the majority of the sporting world has been focused on the World Cup, the NBA Free Agency Frenzy, and Wimbledon.  Well if you were wondering, the MLB is still going on.  And the All Star Break is less than 2 weeks away.  And guess who the biggest surprise team in baseball is.

And boy is it refreshing to see these guys in the hunt.  Sportskraze did pick them to be the wildcard team in his preseason preview back in March, but part of this was out of hope.  I have thought the Reds could contend for the past couple of years, and they have never seemed to get things to click consistently.  Well this year, things are clicking.  And in a big way.  We are in July, and the Reds are 47 and 35, leading the NL Central.  When was the last time you could say that?

The Reds have not finished over 500 since 2000, and have not made the playoffs since 1995.  So it has been a rough last 15 years for this very historic organization.  Cincinnati needs a winner.  And they just may have found one.  Well it appears that way at least.  So the main topic of today’s post.  Should the Reds go after Seattle Mariner ace, Cliff Lee?  I think the better question is, would Cliff Lee come here?

I will first of all state how refreshing it is as a Cincinnati fan to still be in contention in July.  For once we are going into the All Star Break and Trade Deadline, not looking to clean house, but looking to add a little piece to make us a World Series contender.  And the beautiful thing is that we really do not make any moves to continue to contend.  We have the horses to make the playoffs, this would just be an icing on the cake.  And I see no better move the Reds could make than getting Cliff Lee.

For those of you not so familiar on Cliff Lee’s story.  Lee came over to the Indians from the Montreal Expos in a trade in 2002.  Also involved in this trade was current Red’s All Star Brandon Phillips, who played with Lee in Cleveland.  Cliff was not an ace immediately, but over time developed into one of the most consistent and best pitchers in the game.  By 2008, he was an All Star and was also honored as the AL Cy Young Award winner.

Then in 2009, the Phillies, who were in a similar contending position the Reds are in now were looking to add that final piece to repeat as World Series Champs.  So they went out and got Lee right before the trade deadline.  And though the Phillies lost in the World Series, Lee pitched amazing down the stretch and really came up big in the postseason.  This year, Lee is 7 and 3 with a 2.45 ERA.  He threw 3 complete games in June and looks to still be in stellar form.

So can the Reds get him?  I do not see why not.  Cincinnati is an attractive place to play right now in that we are winning and have a strong young group that could keep us in contention for years to come.  In my eyes the Reds could give up, Yonder Alonso, the number 30 prospect according to Baseball America of 2009 and a former number 1 pick of the Reds.  The Mariners are looking for another bat and this would be a great investment.  Also, the Reds currently sport Joey Votto, arguably the best 1st baseman in the game, so Alonso’s services would not really be necessary unless he was converted to another position.  And if the Mariners played hard ball and said this was not enough, the Reds could easily throw in Aaron Harang.  Though I love the guy, we could let him go especially with a guy like Lee coming in.  Cliff would be a definite upgrade.

So can the Reds get Cliff Lee?  Would you like the pick up?

Let me hear your thoughts.

One response to ““Bring on the Heat””