“Back to All Smiles” 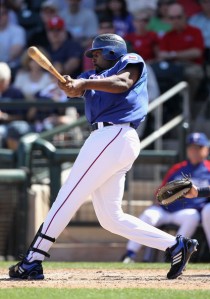 Texas Ranger's star Vladimir Guerrero laces yet another double during the 2010 season.

There is a rejuvenated star in Major League Baseball.  This guy is playing at the highest level again and of course enjoying winning on a franchise that is not used to being a winner, or at least not in recent memory.  After a very rough season last year, Vladimir Guerrero is back to his old self.  He is all smiles and starring on a winner.  What could be better?

Last year, Guerrero had probably the worst year of his 14 plus year career.  The free swinging slugger was injured for a good portion of  the season missing over 60 games.  He batted under .300 for the first time in his storied career.  Just nothing really seemed to be clicking.  It was time for a change.  And after an injury riddled 2009, he filed for free agency.  Most experts stated that they thought this guy was done being a star.  They said that he would not be a bad pickup, but a guy that would never be a big time gamer again.  Due to his impatience at the plate and his age, he may never hit .300 again, and certainly would never be able to lead a team to a divisional crown.

Well the experts were wrong for a change.  As Vladimir takes on his former club tonight (the Angels), he should be all smiles.  And why not?  His current team sits 4.5 games ahead of his former squad in the AL West.  He has been on a terror and is leading the AL in RBIs, 5th in the League in HRs, and 5th in the League in batting average.  He is just having a phenomenal year.  Him and another player who has revived his career, Josh Hamilton (different type of revival than Vlad), make up probably the most dangerous duo at the plate in the game today.  These guys are just straight spraying the ball over the park, hitting for both average and power.  They are doing what they need to do to keep the Rangers winning.  And boy are they ever winning, as they are tied for the best record in the game at this time with the Yankees.

So if you get a chance tonight, tune in to watch a rejuvenated star take on his old club.  I promise you there will be no disappointment in this guy’s game.  He can still play a little.