“All Hail the Mighty King: The World is Coming to Ohio” 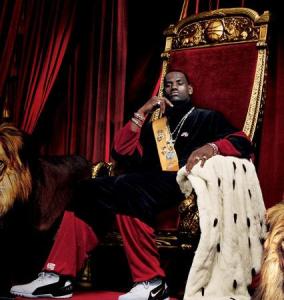 Lebron in his throne, without a crown yet.

LBJ truly is the King.  If America was a monarchy, Lebron would be wearing the crown.  James is not going to visit the teams pursuing him and let them wine and dine him.  No, no no.  Not with the King.  The teams are going to come to him.  The NBA world is coming to Northeast Ohio.  You have to envy that.  And the King comes off very well in that he is saving teams money, not making them fly him out and put on a show in their respective cities.  What a philanthropic guy!  Lebron will get to sit on his throne and let the teams woo him as best as they can.  I wish recruiters would come to my house and try to wine and dine me for jobs..

So the speculation is going to continue.  Over the next couple of weeks, you will see pictures of Lebron dawning the number 6 in a  Bull’s jersey, in a Knick’s jersey, in a Net’s jersey, and I could go on.  Many experts think that they have the mystery solved and the King will be setting up shop in the Windy City along with another free agent gem, Chris Bosh.  Not to mention this team already has the supremely talented and up and  coming superstar in Derrick Rose.  Talk about the three musketeers.  Boston has had a great trio the past three years in Pierce, Garnett, and Allen.  But this trio knocks that one out of the park at this point in large part due to how young they are.  These guys are entering the primes of their careers.

I will be honest with you.  I do feel Chicago is the best option for the King.  It gives him the best chance to win a title now.  If that is what truly is priority number 1 for Lebron.  But, does the King want to live in Michael Jordan’s shadow for the rest of his life?  Or is Lebron’s number 1 priority to become the most recognizable and well-known athlete in the world?  If he sets up shop in New York or New Jersey, he will immediately be even more global than he is now.  He will be the unquestioned King of these cities, as he is in Cleveland.  In Chicago, unless you bring in 6 titles, you will never escape the mega shadow of Air Jordan.

Nonetheless, I am still envious of the position that Lebron is in.  He gets to sit on his throne and let people come to him.  As if he is indeed a real King.  He is coming out in a year where there are other superstars that are free agents.  So he can easily build up an outstanding team around him by teaming up with another star.  Lebron is in a truly amazing position.  And it is highly doubtful that next year at this time, his throne will still be in Cleveland..and can you really blame the guy?

This entry was posted in NBA. Bookmark the permalink.

2 responses to ““All Hail the Mighty King: The World is Coming to Ohio””