So in NFL news, Donovan McNabb is now officially a Washington Redskin.  His days as the savior of the Eagle’s proud franchise are over.  What a tumultuos offseason it has been for the city of Brotherly Love.

First they let Brian Westbrook go.  Westbrook was the heart of their backfield for the better part of the past decade regardless of injuries.  Now they are letting their leader and holder of every franchise quarterback record go for nearly nothing?  What are the Eagles thinking?

They are really rolling the die on whether former backup Kevin Kolb can live up to the high expectations that the Eagles are placing on him.  Philadelphia is no easy town to please.  Next to New York, it may be the hardest city to thrive in as a professional athlete.  The media and fans are ruthless.  They demand a winner and always have high expectations.

Kolb was selected by the Eagles in the 2nd round of 2007 and expected to take over for Donovan upon his retirement.  Kolb’s career numbers are a meager 885 passing yards with a modest quarterback rating of 68.9.  Well  now he is expected to put up the big numbers and get the ball to stud receiver DeSean Jackson.  Kolb will not have a year to screw around.  The Philadelphia fan base expects to make the playoffs every year.  Kevin will have to be ready to lead this team to victories from day one or Philadelphia will swallow him alive.

The other element that is really confusing me about this trade that appears to be a horrific deal for the Eagles.  Why trade him to the divisional rival Redskins who are in desperate need of a quarterback?  Now you have to face this stud who put your franchise on his back for the past 11 years twice a year.  All in all this seems like a terrible deal for the Eagles.

But who knows if it actually is.  Maybe Kevin Kolb will be a prime time Pro Bowl quarterback and McNabb will never perform at a high level again.  Both of these thoughts seem 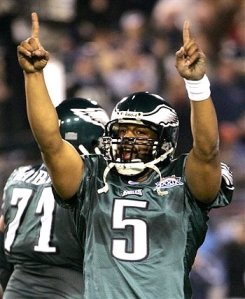 far-fetched in my eyes but who knows.  Only time will tell.

Is Kevin Kolb ready to take center in the city of Brotherly Love?

This entry was posted in NFL. Bookmark the permalink.

5 responses to ““Eagles Fly Away””