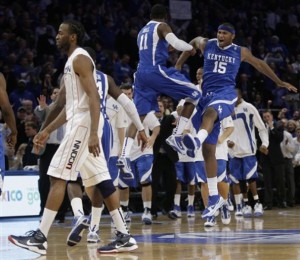 The NCAA Men’s College Basketball All-American team was announced today.  What a group of 5 guys.  Do you want to know something that they all have in common?

None of them will be participating in next weekend’s Final Four in Indy.  How often does that happen?  Can you remember a group of first team All Americans that had 0 participating in the Final Four?  Goes to show you how unpredictable this year’s version of March Madness has truly been.

Now I am not trying to take away from any of these guys.  They are all 5 great players with very strong futures ahead of them.  All 5 of these guys will be drafted in the first round with 4 of them likely being lottery picks.

So lets take a closer look at the Fab Five.  The leading vote getter was Ohio State’s Evan Turner.  Turner, with a very long 6 7 frame appears to be an instant impact player in the League.  With his great size and uncanny ability to score from the interior and perimeter, the transition should be quite smooth for the best that Buckeye nation has to offer.  The only weakness is his inability to take care of the ball at times.  Hopefully he works heavily on his ball handling and decision-making before he straps up in the pros.

The next guy is Big Blue Nation’s John Wall.  Wall had the most high-profile freshman year of anybody since the Longhorn great Kevin Durant.  I mean the guy hit a game winning shot as time expired in his first collegiate game.  From day one, Wall has been a national phenom and rightfully so.  The man even has his own nationally recognized dance.  I don’t see people doing the “Kobe Bryant.” He was an extremely highly touted freshman and lived up to all the expectations.  Wall’s speed is outstanding, but his inability to stay in front of opponents defensively at times is something that he could definitely work on.  Also at times, he did not play great help defense as Jay Bilas pointed out time after time during the UK/WVU game (Bilas definitely is not a big UK supporter).  Wall also has a similar problem to Turner in that he can play out of control at times and turn the ball over.  The beautiful thing though is that he is not even 20 years old yet!  Wall will be a big time performer in the League for years to come.

Wall’s teammate Demarcus Cousins joined him as a 1st team All American and was easily the best big man in the country this year.  “Boogie” as he was proclaimed on CBS during a story that aired in between tourney games during the 2nd round has outstanding size, to go along with great hands, and just an all around fantastic offensive repertoire.  It definitely will not be Cousin’s talent that holds him back heading to the next level.  He is continuing to improve his maturity level but this will be his biggest hurdle heading to the NBA.  If he can learn to not overreact on the court and refrain from whining to the refs, he will be in for a big time career in the League.  I will say that I have never seen a man whine more about getting hit in my life.  Being a guy his size, you have to expect to get hit a lot.  Just suck it up and play ball Boogie.

Then you got the 2 studs coming out of the Big East in Wes Johnson and Scottie Reynolds.  These 2 players had fantastic seasons and really were their team’s leaders on and off the floor.  Wes Johnson has a very quite demeanor, but don’t let that fool you into thinking that he does not have a big time game.  Johnson will have to continue to work on his strength and continue to demand the ball at the next level.  At times his quite demeanor can let him get lost in the shuffle.  He will have to be more proactive at the next level in order to prevent this from happening.  But he should definitely be in for a solid career.

Scottie Reynolds might have been the best leader out of any of these guys for his respective team.  But he may have more growing pains than the other 4 guys as he hits the League.  His outstanding work ethic should help him turn into a solid performer at the next level in time.  Scottie’s lack of size (6 2) and lack of blazing speed will make things tough though.  It is very tough to be an undersized guard at the next level without amazing wheels.

All 5 of these guys will go on to have nice careers in the NBA though and were very fun to watch this year in College.  It still behooves me that none of them will be playing in Indy next weekend.

Does this surprise any of you?  Do you think any of these guys will tank big time in the League?

This entry was posted in NCAA Basketball. Bookmark the permalink.